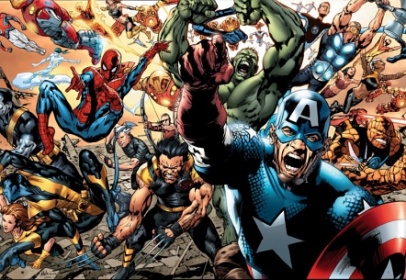 So, here we are in 2014. Hopefully, we’ll see more of the awesomeness that we saw in 2013 in comic books, as some seriously cool stuff came out. However, there is always the other side to things; some companies made some horrible errors and some obvious ‘money grabs’. Let’s take a gander, shall we?

Let’s start with the big boys. Their restart of various comics, like Avengers, Hulk, and various X-Men books was truly entertaining and inspiring. Using some of the top writers and artists in the industry, they made a huge push to revamp their books with a more ‘mature’ audience in mind, while also keeping true to the origins of the characters (unlike DC’s New 52, which attempted to re-write the universe after events in Flashpoint—which we’ll be exploring next time). With such amazing plot lines as the Avengers having to destroy an alternate Earth in order to save this one, Bruce Banner basically blackmailing S.H.E.I.L.D. so he can go back to being a scientist instead of just a green rage monster, and the original X-Men being stuck in the current time period and none too happy about what the current X-Men are up to, especially Scott Summers, I find myself repeatedly saying things like, “Wow, it’s fun to read X-Books again,” (which hasn’t been the case since the 90’s), and “Well, I never read the Avengers before, but it’s pretty awesome now.” Even side books like Thunderbolts & Savage Wolverine have been a bunch of fun. Without a doubt, the single best book Marvel put out the last year was Thor, God of Thunder. Full of consistently epic storytelling by Jason Aaron, spanning plotlines like a serial killer of the gods and the most evil dark elf the realms have ever seen, and exquisitely illustrated by Esad Rubic & Ron Garney, Thor most definitely gets my vote for best Marvel book of 2013.

Which brings us to where they messed up…Wolverine. Can it be that perhaps one of the most amazing characters ever written has become ‘kid friendly.’ NO! NO! NO! NO! NO!! This is not why we fell in love with this character!! That’s not WHAT HE DOES BEST! While Savage Wolverine comes close, his other titles have failed miserably. If you want to read a real Wolverine story, read X-Force: Sex & Violence. Seriously epic & classic, with passages like:

That, my friends, is what he does best! Old Man Logan is also pretty awe inspiring, but that’s from a few years ago at this point. Also, while starting out with amazing potential, the Avengers’ big summer crossover, Infinity, took a quick nosedive somewhere in the middle. So much went on that I didn’t even care about the characters or what they were up to anymore, not to mention it went on at least 3-4 issues too long in three different titles! Perhaps the biggest mistake Marvel made in 2013 was the sissification of one of the greatest Marvel villains ever, Thanos. In preparation of the movies Avengers 3 (yup…rumor has it that he doesn’t actually show up until the 3rd one) & Guardians of the Galaxy, we saw a bit more of Thanos in the Marvel universe, and quite frankly it was more than I wanted to see. Not only does he get easily and simply defeated at the end of the (far too long) Infinity storyline by his son turning him into a statue (Really? After 4-6 months of a massive crossover, one of the most powerful entities in the universe gets turned to stone? Really?? Vomit much?), but we get an origin story, which was brilliantly and beautifully illustrated by Simone Bionchi, that pretty much shows us a Thanos growing up & ‘trying to fit in’ with the cool kids, but then turning evil because of mommy issues & falling in love with Death. Once again…NO! NO! NO! NO! NO!! Thanos is simply pure evil; that’s the point. He would never have been a child trying to fit in with the cool kids. Nice attempt to relate to us nerds, Marvel, but…EPIC FAIL.

One final note on Marvel’s good/bad: The “Ultimate” universe was such a fun and refreshing change from established comic book norms. With the longest running consistent books Ultimate Spider-Man and Ultimate X-Men, we got so see such heart-wrenching events as the death of Peter Parker (for realz…the actual death… not the I’m back, but really really gone. Some of the scenes with Gwen Stacey, Aunt May & Mary Jane were enough to make any of us weep) and such mind-blowing events as Colossus crushing a prison guard’s head like a grape after being constantly tortured in a death camp (I was sold immediately after that scene.). But alas, with the good must come the bad: an “Ultimate” universe crossover with Galactus destroying it all. Way to cripple one of your best comic lines in ages.

Well, that’s all for now…next time DC gets theirs!