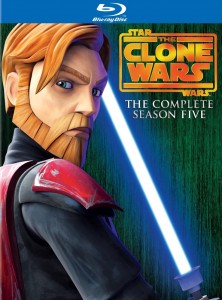 That’s it folks, here is the final (and fifth) season of “Star Wars: The Clone Wars”. This show was easily one of the best things on television for the last 5+ years. The show got increasingly better with each season as it matured. It also got quite darker with its storylines. I liked that they weren’t afraid to take that route and give the hardcore “Star Wars” fans what they were looking for while still adhering to the younger audience. Easily the best arc in this season has to be the one around Ahsoka Tano. I was blown away with this season and I feel that it just ended too soon. Luckily, LucasFilm has big plans for its next animated series “Star Wars Rebels”, which premieres next year. I will be anxiously waiting and hope that it can hold the same charm and excitement that “Clone Wars” did.

Season Five Official Premise: In its Emmy-winning fifth season, the gripping Star Wars story moves closer to the grim events of Star Wars: Episode III Revenge of the Sith and several major players face their destinies as the galaxy plunges into darkness. Planets are rocked by revolution, ancient Jedi secrets are explored, and Ahsoka Tano — the spirited Padawan so central to the series — faces a major crisis that will change her forever.

One thing I loved (loved…tear) about “The Clone Wars” was that it is extremely cinematic and each arc feels like a mini movie. The 1080p transfers like past seasons doesn’t cease to impress. The animation is extremely sharp and the details are extremely meticulous. The DTS-HD Master Audio 5.1 track also delivers for each episode completely. These episodes are so epic and action packed and you get a perfectly balanced track from every ship flying by to lightsaber activating.

The 2-disc Blu-ray release of “The Complete Season Five” delivers all 20 episodes bring the series to a close (another tear). It includes two episodes in their director’s cuts, which were never seen on TV. Get ready for this, there are an audio commentary track on EACH episode, so yes that’s 20 commentary tracks! Fans, including myself, are going to love going through each episode of this great season once again to get the inside tip. Also exclusive to Blu-ray (for a limited time) is “Jedi Archives”, which is an extensive database of early animation, concept art and 3D turnarounds for the season.