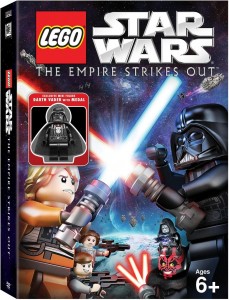 I love the idea of “LEGO Star Wars”. I have various pieces built together all over my home office. When they made the feature, “LEGO Star Wars: The Padawan Menace”, I was head over heals. It was released in a beautiful Blu-ray/Combo pack with a limited edition Han Solo character. That brings be to wonder for this release, Why no Blu-ray? That is one thing that I am caught up for this release (would have been a 5/5 rating). Why release one in high def and not the other. If you can get over that than this is absolutely hysterical and a must own for any “Star Wars fan”. There is so much crammed in the short 22-minute feature that you are left wanting more but at the same time absolutely satisfied.

Official Premise: Your favorite characters are back to save the galaxy in LEGO Star Wars: The Empire Strikes Out. The heroes of the Rebel Alliance including heroic Luke Skywalker, swaggering Han Solo and steadfast Princess Leia have no time to celebrate their victory over the Empire as a new Imperial threat arises. But as Jedi-in-training Luke embarks on this next mission, he discovers that his celebrity status as a “Death-Star-Blower-Upper” can be a double-edged lightsaber when he’s constantly mobbed by crazed fans. So much for secret missions! Meanwhile, Darth Vader and Darth Maul are locked in a hilarious “Sith-ling” rivalry as they compete for the Emperor’s approval. It’s an action-packed comic adventure that’s out of this world!

To be honest, I am shocked that they even got to release this film now that Disney owns Lucasfilm. They already canceled “The Clone Wars” and shelved “Detours”, so I am just happy that they didn’t shelf this as well. I do hope that Disney smartens up and that they are planning more of these “LEGO Star Wars” features because they are so much fun. “The Empire Strikes Out” packs some very funny yet witty slapstick humor. Fans can also expect your favorite LEGO Star Wars characters. Just because this title is related to “Empire Strikes Back”, we still get our favorites like Darth Maul, Ahsoka Tano and many more who pop in for a laugh or two.

Written by Emmy Award winner Michael Price (“The Simpsons”), the feature includes voices from series regulars including Anthony Daniels, Ahmed Best, Tom Kane and  Sam Witwer appear as the voices of C-3PO, Jar Jar Binks, Yoda and Darth Maul. Also a bunch of other veterans return including Kenneth Colley, Brian Blessed, Andrew Secombe and Julian Glover, whom reprise their roles of Admiral Piett, Boss Nass, Watto and General Veers, respectively. “The Empire Strikes Out” was dedicated in memory of Ralph McQuarrie, the designer of the original trilogy, who recently passed away. Lastly I haven’t forgotten  the DVD will include an exclusive collectible Darth Vader w/Metal LEGO minifigure. So that is easily worth the $10 price point alone.