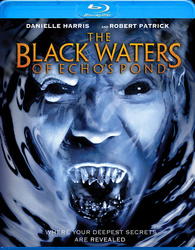 Finally!! If you are a horror fan than you will know what I am talking about here. I saw “The Black Waters of Echo’s Pond” during its all too brief run in theaters back in early 2010. So for the last nearly four years, all us horror fans have been anxiously waiting for a DVD…Blu-ray…any type of home media release for this film. Luckily Anchor Bay finally stood up and hooked us up. The film is jam-packed with a great genre cast including Danielle Harris (“Halloween”), James Duval (“Donnie Darko”), Nick Menell (“Friday the 13th”), Electra & Elise Avellan from (“Machete) and Robert Patrick “Terminator 2: Judgement Day”). Flawed but still a ton of fun and worth checking out for all those horror fans who missed it in theaters. Worth the wait!

Anchor Bay delivered “The Black Waters of Echo’s Pond” with a fine Blu-ray release. The 1080p transfer looks very sharp on the low-budget horror flick. The film is quite dark and yet it still looks great. The Dolby TrueHD 5.1 audio track works great with the film’s suspense, especially with Harry Manfredini’s amazing score! He is a legend in terms of horror scores and he really delivers a great score here! In terms of special features, I have to admit that I am a bit let down. I was hoping for a jam-packed release with special features but instead we only get an Alternate Opening, which is cool but not what I was expecting. A commentary track would have been cool as well, especially with this cast. I guess it all comes down to the fact that at least the film is finally released for fans to see that is more important.