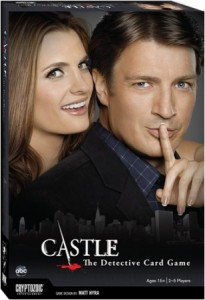 “Castle” is easily one of the best shows on TV. I love everything about the show from the clever stories to the fantastic cast. When I saw that Cryptozoic Entertainment released a card game based around the show, I knew that I had to give it a go. In the world of high-def video games, this was a welcomed change and I feel that people sometimes forget what it is like to play a actually card game. The game is very easy to pick up and once you get started tons of fun for everyone involved. Highly recommend for any fan of “Castle”. I see myself playing this game quite often over the next few months.

Official Premise: “Castle The Detective Card Game” is your opportunity to gather clues, make deductions, and determine the murderer, just like Castle and Beckett do each week. As a new detective, you’ve been asked to assist on a slew of murders raging across the island of Manhattan. Do you have what it takes to catch a killer?

You can be one of six characters including Castle, Beckett, Esposito, Ryan, Lanie and The Captain, each of them have their own special ability that can be used once per game. The idea of the game is simple, there are a series of suspect cards and one each you place one poker chips on each (heads down) with the word “guilty” or “not guilty” written on them. Each of the suspect card have three investigations that are required to be made before you can confront. The investigation cards are dealt out to each player and on each turn you are able to pick or dispose a card. The deck consists of of eighty-one cards with nine conditions including investigate crime scene, poker game consult, autopsy and more.

The game itself requires 1 to 5 players in order to play and the games can range from around 10 minutes to 45 minutes. In fact, the first game I played, I got three investigation cards that matched the required conditions on a suspect. I confronted that suspect and immediately got the guilty chip, so it is really all luck of the draw there. Other plays I played lasted much longer. The rules of the game vary due to the amount of people playing.

The game may not be the most difficult and complex game to play but there is tons of possibilities and due to the random choices, you can easily play this game many times before it gets repetitive. In fact, I would love it if Cryptozoic would release new suspects and investigation cards as an add-on bonus to this game, that would you can keep it fresh after playing for a while. Also “Castle” fans be aware that if you purchase the “Season Five” DVD, you get a bonus investigation card as well. Have fun!