Ryuhei Kitamura has directed some of my favorite recent films like “Versus”, “The Midnight Meat Train”, “Godzilla: Final Wars” and most importantly his latest “No One Lives”. This film packs a great cast and is a hell of a fun ride. Media Mikes had a chance to ask Ryuhei a few questions about “No One Live” and also got some news about his planned sequel to the cult classic “Versus”.

Mike Gencarelli: How did you end up directing “No One Lives”?
Ryuhei Kitamura: I loved the script and this is not just about blood and guts, it’s a twisted and dark love story. I loved the main character DRIVER who does it all for love killing machine. I thought I could I create new iconic anti-hero. Also I liked the good old days 80’s Slasher movies.

MG: “No One Lives” is your second U.S. film after “Midnight Meat Train”; what was your biggest challenge on this project? How did the two productions differ for you?
RK: It’s always the same. Movie making is challenging no matter what size or where you do. You have to fight against time, money and ego. We had so many challenges, but I had strong support from my crew and cast, and my producer Harry Knapp and Elton Brand. They made me survive.

MG: What do you enjoy most about working in the horror genre?
RK: I enjoy killing tons of people in brutal ways because I can’t do that in real life even though there are tons of f*ckers I want to terminate (lau 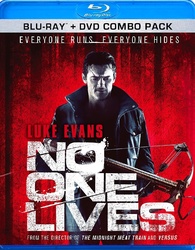 MG: You are no stranger to gore; are you ever concerned about going too far?
RK: I was hired to do movies like “Midnight Meat Train” and “No One Lives”. What’s wrong with go too far? That’s what the fans want I believe. Of course I wouldn’t do the same when I do PG-13 horror movie.

MG: Being a huge Godzilla fan yourself, what was it like writing/directing the last film “Godzilla: Final Wars”?
RK: It was pure honor and fun to be the part of one of the greatest franchise of all time. Can’t wait to watch new Hollywood Godzilla.

MG: I’ve heard talk about a “Versus” sequel in the cards; what can you tell us?
RK: I can’t talk much, but I guarantee it will have same spirits, same craziness, much bigger scale and next level of action. I already have a great script and am going to make this happen in the next few years.

MG: What do you have planned next?
RK: I’m in pre-production of my new action movie to be shot in Asia. I have some projects lined up but it’s the movie business and never know what I’ll be doing in six months.