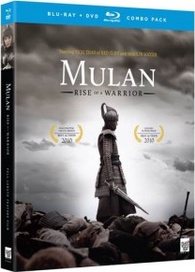 I can’t help it (and I am sure I am not the only one), whenever I think about “Mulan”, I can’t help but think about the 1998 Walt Disney animated film. Well before watching “Mulan: Rise of a Warrior”, you must separate that connection because it is two very different film. There is no smart-talking dragons here, sorry Eddie Murphy. The director Jingle Ma, who is known for action films like “Tokyo Raiders” and “Seoul Raiders”, really had a vision for this and for the most part he is successfully in making it work. The film itself seemed a little too long for me but it is packed with great performances and impressive action sequences. So I think it is worth recommending to check out for a renter at least.

Official Premise: When barbarian hordes threaten her homeland, the brave and cunning Mulan disguises herself as a male soldier to swell the ranks in her aging father’s stead. The warrior’s remarkable courage drives her through powerful battle scenes and brutal wartime strategy. Mulan will be no stranger to sacrifice as she rises to become one of her country’s most valuable leaders. She’ll lose dear friends to the enemy’s blade—but can she win the war before her secret is exposed?

I originally though that this was an odd title for Funimation to be releasing since they are primarily known for releases some of my favorite Japanese animes. But I give them credit for rescuing this film, which was shot back in 2009, and gave it a proper Blu-ray release. In fact, they released this as a Blu-ray + DVD Combo Pack, which is a real treat. The 1080p transfer works with the epic feel that this film brings especially in the battle scenes. This release also comes stocked with both a Mandarian Dolby TrueHD 5.1 track and also an English dub with same specs. I preferred the original language track for sure over the dub but I still like having the preference.

There is no much in terms of quantity for the special features but there is great content. The “Making of Mulan” runs the length of a feature film just over 70 minutes. I enjoyed this quite a bit, there is a lot of great footage included in here. You really get a feel for the depth of the production within this feature. The other extra is a collection of interviews with the cast and crew, which runs about 15 minutes, also worth checking out for sure. Both extras are presented in Mandarin with English subtitles. So like I said no a lot of extras but they pack a solid punch. Great job overall, Funimation! Hope to see more live-action entries in your upcoming library as well, as your normal kick-ass animes.