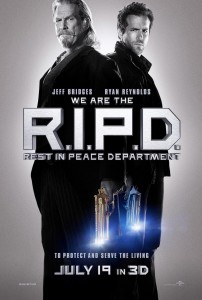 As you watch this movie (and I recommend you don’t) you’re going to make a lot of connections between “R.I.P.D.” and the sci-fi action/comedy and summer hit of 1997, “Men in Black”. “R.I.P.D.” is not a comedy. You will most likely not be leaving your seat with a smile on your face and discussing how much you enjoyed the movie with your friends. You may instead want a neuralyzer to erase your memory.

Nick Walker (Reynolds) is a hardworking man for the Boston Police Department with a loving, adorable wife and cute home nestled in suburbia. Recently he’s felt guilty about some gold he and his partner Bobby (Bacon) have recently acquired during a raid. Nick tells Bobby his worries, which leads to Bobby shooting Nick to death amidst the chaos of a meth bust. This is where we meet the world of the R.I.P.D.: the Rest In Peace Department. Because Nick had some questionable ethics on Earth, he’s told he can face judgment now and risk damnation or put in some time with the R.I.P.D. and redeem himself. At least that’s how his new boss, Mildred (Mary-Louise Parker) describes it. His job is to find people who’ve escaped the afterlife (called a dead-o) and now wander the streets of Earth as normal looking people but are grotesque, dead creatures underneath. Some of them are really disgusting to look at. She pairs him with Roy (Jeff Bridges), who speaks like he’s in the Wild West and has been doing this for well over 100 years.

I haven’t read the comic this movie is based off of, so I can’t really shame whoever ruined the script. It feels like a bunch of stolen ideas were jammed together. Kind of like the person who’s putting together a jigsaw puzzle and instead of finding the right pieces, constantly pounds wrong pieces together in frustration. That’s not to say the actors don’t try really, really hard. The script has some bad dialogue, but a huge dose of credit goes to Bridges and Reynolds. They aren’t given much, but they make it work, even when it’s painfully unfunny. Since Nick and Roy can’t be seen as themselves, when they walk on Earth they have avatars which provide some great visual gags. Roy’s avatar is a stunning, golden curvy goddess (Marisa Miller) while Nick’s avatar is a frail looking Asian man (James Hong). It’s quite humorous when people whistle and flirt with Roy’s avatar or when they see the elderly avatar of Nick dust himself off after being hit by a car. I also got a really good giggle out of seeing the delightful James Hong holding a banana (it’s actually a gun). Besides that, the humor depends on Roy saying a swear word or one of the walking dead farting and burping. Yes, you read that right. The script thinks bad CGI looking creatures can be funny as long as they fart or burp.

This movie is directed by Robert Schwentke, who also worked on “RED” and definitely has a knack for slapping together some over the top and fun action scenes. The best parts of the movie come when they’re trying to capture a dead-o, but those scenes don’t last long enough and we’re back to seeing a couple more poorly done cues from “Men in Black”. The one thing this movie can be proud of is trumping “The Lone Ranger” as the biggest waste of potential this summer.

I could nitpick the finer details of this movie, like why the dead hate cumin or how a soul could even escape judgment once it’s dead, but you have to suspend some logic in a movie like this. If you’re willing to do that for every minute, you might find yourself enjoying the movie like some people at the screening were. By the time the credits started rolling, I’ll admit I found myself laughing a couple of times and enjoying Roy trying to lasso a dead-o. I just wish they could have let the comic’s short lived time from 1999-2000 rest in peace. But instead they slapped it awake and handed it a check for $130 million. Instead of breathing some life into it and letting it stand on its own feet without the crutch of other people’s ideas, they suited it up and sent off to the theaters for its own funeral.