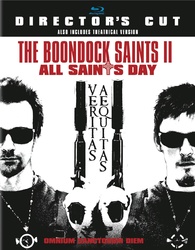 I remember I rented the first “The Boondock Saints” on VHS when it was a ‘Blockbuster Exclusive’ rental. This was almost 15 years ago and before it was this cult phenomenon. When there was word that “The Boondock Saints II: All Saints Day” was being made 10 years after the first, I think it made every fan jump up and down (including myself). Well it’s been 4 years since this sequel was released and we can get excited again since Writer/Director Troy Duffy’s is releasing a new Director’s Cut which features 27 Minutes of Never-Before-Seen Extended Footage. There is a longer opening sequence, a lengthened fantasy sequence and an extended elevator sequence leading up to the Prudential shoot-out. So with the director’s cut the running time gets bumped up to 144 minutes and it is AMAZING!

“The Boondock Saints II: All Saints Day” is a a rare feat where it actually tops the original. This sequel to back the original cast, Including Sean Patrick Flanery, Norman Reedus and Billy Connolly along with new additions including Clifton Collins Jr., Julie Benz, Peter Fonda and Judd Nelson. I do not remember a more explosive theatrical experience then when I saw this film in theaters. I know fans have been bugging writer/director Troy Duffy to do a third film and I really hope that happens one day. I am not sure why this release is coming now, if not to capitalize on Norman Reedus’ insane fandom from “The Walking Dead”, but either way I am excited and it is a must for any fan of this series!

Official Premise: From Troy Duffy, writer and director of The Boondock Saints, comes the much anticipated sequel to the tough, stylized cutting edge saga of the MacManus brothers (Norman Reedus, Sean Patrick Flanery). The two have been in deep hiding with their father, Il Duce (Billy Connolly), in the quiet valleys of Ireland, far removed from their former vigilante lives. When word comes that a beloved priest has been killed by sinister forces from deep within the mob, the brothers return to Boston to mount a violent and bloody crusade to bring justice to those responsible. With a new partner in crime (Clifton Collins Jr., Star Trek) and a sexy FBI operative (Julie Benz, TV’s Dexter) hot on their trail…the Saints are back!

The 1080p transfer still looks great like the past releases, especially with the new footage. The DTS-HD MA 5.1 track is killer as well with the non-stop action. The line “Ding Ding Motherfucka! Ding Dong!” is presented perfectly. The real catch for this release is that it comes as a two-Disc Blu-ray combo pack with both the Theatrical and Director’s Cut versions. This release is currently set as a Best Buy exclusive release, so fans need to be sure to pick this up for sure.

The special features are in-line with the past Blu-ray releases. We get a pair of audio commentary tracks from cast and crew. There are two short deleted scenes. Then there are seven featurettes including “Unprecedented Access: Behind the Scenes”, “Billy Connolly and Troy Duffy: Unedited”, “The Cast Confesses: Secrets From the Set”, “Inside the Vault: The Weapons”, “‘The Boondock Saints’ Hit Comic-Con”, “Saints Off Script” and “Back to Boondock”. All these special features are must see for any fan of the series but they are not anything new for this release. But don’t forget that this new release contains the pretty sweet director’s cut of the film, so that is enough for me!