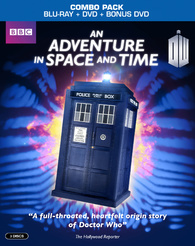 When I saw the advertisement for “An Adventure in Space and Time”, I thought it was another “Doctor Who” special or documentary, I had no idea that it was a docudrama about the origin of the show itself. The film stars David Bradley as William Hartnell, the actor who portrayed the First Doctor, along with Jessica Raine, Jamie Glover, Sacha Dhawan, Lesley Manville, Jemma Powell, Reece Shearsmith, Mark Eden and Brian Cox. The film has a certain television feel to it but I was literally in love with it from the movie it started. David Bradley is such an amazing actor and it was nice to see him take the spotlight for once and really shine. As a huge “Doctor Who” fan, I encourage everyone to see this if you are a fan of the series. It is a great story, well done and at the same time very entertaining.

Official Premise: Travel back in time to witness the dramatic birth of Doctor Who. Actor William Hartnell (David Bradley, Filch from the Harry Potter films, Game of Thrones) felt trapped by a succession of tough-guy roles. Wannabe producer Verity Lambert (Jessica Raine, Call the Midwife) was frustrated by the TV industry’s glass ceiling. Both of them were to find unlikely hope and unexpected challenges in the form of a Saturday afternoon drama, time travel and monsters! Allied with a brilliant creative team, they went on to introduce the world to the longest running science fiction series ever, currently in its 50th year and counting.

BBC Home Entertainment deliver this release as a 3-disc set Blu-ray + DVD combo pack. The Blu-ray includes the film “An Adventure in Space and Time” presented with a very impressive 1080p transfer and DTS-HD Master Audio 5.1 surround and a slew of extras. First off, we have “William Hartnell: The Original” features cast/crew talking about the actor.  “The Making of ‘An Adventure in Space and Time” is narrated by Carol Ann Ford and goes behind-the-scenes with cast/crew.  “Reconstruction: Four Sequences” has the producers talking about recreating the title shots. There are also two deleted Scenes included.

The second disc, which is a bonus DVD, is a real winner.   It includes “An Unearthly Child” from 1963, which is the original broadcast version of the very first “Doctor Who” series, in 4 episodes. It also includes the “Original Pilot of An Unearthly Child”, which shelved and never used. There is also commentary track available on both episode 1 and 4 of the original “An Unearthly Child”, as well as commentary for the 40 minute pilot. Lastly there are various theme music videos, comedy sketches and a photo gallery included. Disc three is a DVD version of “An Adventure in Space and Time” wrapping out this amazing combo pack.