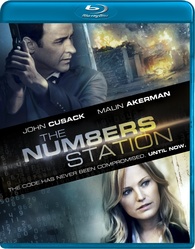 When it comes to John Cusack, I am not sure what it is but I am always down for this films. Same goes for Malin Akerman, who is great in “Childrens Hospital” as well as “Rock of Ages”.  Both of them are great in this film. The story is well done and packs some nice suspense.  If you haven’t heard of this film that ok since it was initially available through iTunes and only received a limited U.S. theatrical release in April 2013. I feel that these two actors should have been given more of a push for mainstream, since it should have had a decent sized audience.  If you are looking for a decent thriller with good action then I would check this out, especially for John Cusack fans!

Official Premise: After his latest mission goes disastrously wrong, veteran CIA black ops agent Emerson Kent (John Cusack) is given one last chance to prove he still has what it takes to do his job. His new assignment: guarding Katherine (Malin Akerman), a code operator at a top-secret remote CIA “Numbers Station” where encrypted messages are sent and received. When an elite team of heavily armed assailants lays siege to the station, Emerson and Katherine suddenly find themselves in a life-or-death struggle against an unknown enemy. With the station compromised and innocent lives at stake, they must stop the deadly plot before it’s too late.

The 1080p is very impressive as well.  I thought the film was well shot and looks awesome on Blu-ray. I have to admit the DTS-HD MA 5.1 is quite amazing. It is kick-ass and in your face. The action is sharp and the dialogue is clear. The score is also fantastic courtsey of Paul Leonard-Morgan (“Dredd”). The special features are not the greatest and there is only one extra but it does the trick. “The Making of The Numbers Station” is a 15 minute behind-the-scenes look at the film with interviews from John Cusack and Malin Ackerman. If you liked the film than this EPK is well worth watching.