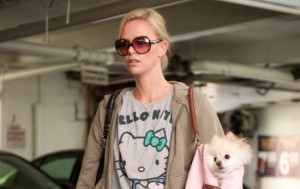 Watching this film, the only thing I could keep thinking is that I feel bad really bad for the upcoming “The Evil Dead” remake since Diablo Cody is putting her spin on the film. Didn’t anybody see “Jennifer’s Body”. “Young Adult” was barely watchable and made only possible by the cast performances. I am beginning to think that the quirky success of Diablo’s writing in “Juno” was a fluke. The Blu-ray presentation is decent overall but nothing stunning. The video looks sharp and the audio track includes an DTS-HD MA 5.1 track and works well with the music. Charlize Theron definitely does a good job in her role but Patton Oswalt continues to prove that he can do drama really well. If anyone saw his film “Big Fan”, this is another great role for him. Too bad he can’t save this film.

The film follows the most depressing woman ever, Mavis Gary (Charlize Theron), who is a divorced bitter ghost writer of a popular young adult novels. While procrastinating to finish the last book of the canceled series, she gets an idea to steal back her high school boyfriend Buddy Slade (Patrick Wilson). One problem he is married and recently had a child. Mavis heads back to her hometown of Mercury, Minnesota to try and win him back and in the process realizes what a mess that her life truly is.

The special features are decent but nothing special. The audio commentary track includes Director Jason Reitman, Director of Photography Eric Steelberg, and First Assistant Director/Associate Producer Jason A. Blumenfeld, it provides basic plot and production information. The best feature is “Misery Loves Company: The Making of Young Adult”, it runs just shy of 20 minutes and really get into the film’s story with Diablo Cody and the production with Jason Reitman. “The Awful Truth: Deconstructing a Scene” is a character review with Diablo Cody. There is a 45 minute Q&A with Janet Maslin & Jason Reitman at the Jacob Burns Film Center, it is very in depth and worth checking out. Lastly there is six deleted scenes, running about seven minutes, which would have made this film even more unwatchable.