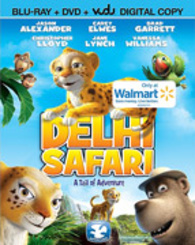 “Delhi Safari” is the latest CG animated film, which originated as a foreign film and retooled with an American cast. This film originated from India and still keeps its Bollywood feel. It is filled with music and songs throughout. It does have a great American cast including Vanessa Williams, Cary Elwes, Brad Garrett, Jane Lynch, Christopher Lloyd and Jason Alexander. The movie is decent not amazing but I am also a sucker for music and animation.  I think that kids would enjoy it. They probably won’t get the message but still be entertained.

A wacky pack of mismatched animals takes on the human race as they travel to the big city to protest the destruction of their jungle. How can a leopard cub and his mother, a peace-loving bear, a mischievous monkey, and a wisecracking parrot present their ideas to a bunch of humans? You ll find out in this hilarious and heart-warming adventure that will have you cheering at the end.

This film is currently released as a Wal-Mart Exclusive. I believe that in June it will be released everywhere else. This is released as a combo back with a Blu-ray + DVD + Digital Copy.  The 1080p transfer looks nice but this is another example of Arc Entertainment refusing to release these films in there proper 3D format.  This film would have had a lot of extra “Wow” if it was shown in 3D.  The DTS-HD Master Audio 5.1 works perfectly with the music and of course the songs.  There is no additional special features included on the release.