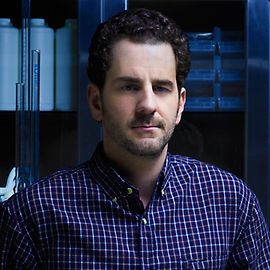 Aaron Abrams is co-starring as Brian Zeller in NBC’s “Hannibal.” He has appeared in various other TV shows including “NCIS: Los Angeles”, “Rookie Blue” and “Stargate: Atlantis.” He also wrote and co-executive produced “The L.A. Complex” for The CW. Media Mikes had a chance to chat with Aaron about this new show and what we can expect from his character.

Mike Gencarelli: Tell us about your character Brian Zeller in “Hannibal”?
Aaron Abrams: Zeller is an FBI agent who works with a team to catch serial killers. He’s a bit of a medical genius, that’s his specialty, so its fun because I get to dig around in dead bodies and perform autopsies. It’s also cool because I think on most shows this kind of character can be dorky but that’s not the case here, I wear a leather jacket and pull a gun and stuff. Zeller may use a lot of big words, but he’s a dude.

MG: In order to get in the zone for the show; did you revisit films like “Red Dragon” etc?
AA: I re-read all the books and watched the films again. I own a DVD of “Manhunter”, I was kinda obsessed with it as a kid, so I knew it by heart anyway. It was the first scary movie I ever saw that wasn’t like a monster killing naked teenagers or something. It was creepy and terrifying, you know, like “Silence of the Lambs” was too. Zeller pops up in “Manhunter”, he’s played by Chris Elliott of all people. So, I’m hoping to resurrect all of his roles 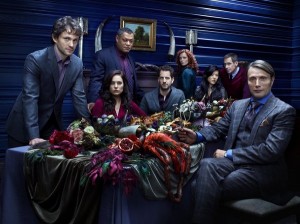 one by one. Next, I’m going to try to star in a re-launching of “Cabin Boy”.

MG: How is it working along side Mads Mikkelsen, Hugh Dancy and Laurence Fishburne?
AA: It’s super great. My character is pretty cocky so I get to mix it up with Hugh and Laurence a bit. I’ve often got ideas about the cases that aren’t necessarily shared by the rest of the crew. And often I’m quite belligerent about that. Thank goodness I don’t have a ton of scenes with Mads, I’m sure Hannibal would take great issue with me. And by “issue,” I mean “eat my face.”

MG: What is the vibe on the set?
AA: Well it’s a really dark show and my scenes can be particularly gruesome. So that’s sort of always lingering. But at the same time, Scott Thompson is there and he’s kind of an unstoppable tornado of hilarious. Hetty Park is too. Hugh is also a really funny guy. So there’s a lot lightening up the darkness around us.

MG:  I am a big fan of “Pushing Daisies”, did you get to hang with Bryan Fuller at all?
AA: Bryan is a great, great guy. He’s not just a showrunner, but a visionary. Like “Pushing Daisies” or “Wonderfalls” or any of his other work, he’s creating a whole world. People talk a certain way, there’s a very specific tone to everything, his use of color. He’s amazing to work with because not just because he makes super cool TV, but 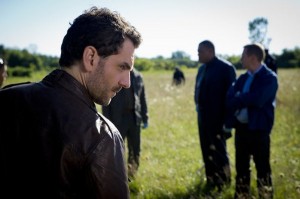 because he creates such a wonderful world to play in. Also, he’s always very well dressed. Which is nice.

MG:  How does working on this show compare from your other TV work?
AA: Well the simple answer I guess is that its very different because the show is unlike anything else I’ve ever seen on TV. There’s also a feeling on set that’s different, like everyone knows this is different then other FBI shows, or other serial killer shows, or really anything…so there’s this sense on set that you’re doing something very cool. As far as my character, I’ve played a lot of different kinds of belligerent douches. “LA Complex” was a Hollywood douche, Rookie Blue was a tough guy douche, “NCIS” was a nerd-douche. “Stargate Atlantis”…Alien douche. But Zeller is by far the smartest of them all. I’d even say that he’s so smart that he ceases to be a douche at all. He’s just a smart dude with strong opinions. But I dunno. I guess we’ll have our answer if I piss off Hannibal and he eats my face off.