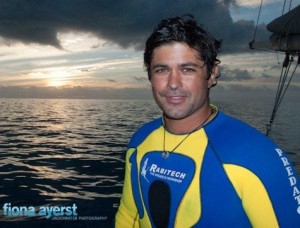 Ryan Johnson grew up in the island nation of New Zealand and has always been drawn to the sea. Having dreamed being a marine biologist, he moved to Southern Africa in 1998, where he began to work with the ocean’s greatest predator—the great white shark. Ryan joined up with the research group Ocearch as their Chief Scientist and was involved with the television series “Shark Wrangers” last year on History. Ryan took out some time to chat with Media Mikes about working with sharks and the importance of tagging them.

Mike Gencarelli: How long have you been working with sharks? What was your draw?
Ryan Johnson: I have been working with sharks since 1998, when I started my M.Sc thesis looking at the impact of white shark cage diving on the behaviour of white sharks, and marine ecology, in the Gansbaai area. My draw was adventure, passion and the chance to learn about an incredibly charismatic animal in my chosen field as a marine biologist.

MG: What drew you to join the Ocearch as Chief Scientist in 2012?
RJ: Ocearch NGO approached me a couple of years prior to them arriving in South Africa. Chris Fischer then suggested his ideas and the research potential that his organization could offer the South Africa scientific community. Being a shark biologist from South Africa, I am mandated to produce knowledge to enable the informed management and conservation of sharks in our region. The most powerful tool currently available to produce this data is satellite telemetry work that enables the description of home ranges, critical habitats, and migratory patterns. This knowledge is essential to empower managers and conservationists to guide their action in an effective manner. As a developing country South Africa does not frequently have sufficient resources to dedicate the required logistics and finances to research that will answer these crucial questions. Ocearch producing these resources for the South African shark academic community to use and fulfill our research mandate was what 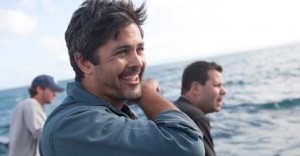 attracted to the opportunity. In addition, on review, the practical skills of the Ocearch team made them a perfect partner to conduct this research with.

MG: Tell us about Ocearch is planning for Expedition Jacksonville?
RJ: The Ocearch model is to work with local scientists that will carry on the work once the mother vessel and Ocearch has left. As such, I am not involved with the Jacksonville Expedition, nor am I privy to the planning. My focus is to have the data from the South African expedition processed and published.

MG: How many sharks have been tagged by the Ocearch?
RJ: During the South African Expedition, a total of 47 sharks were tagged with various combinations of transmitters consisting of one/some or all of (a) SPOT satellite tags, (b) acoustic transmitters and (c) PAT satellite tags. This included six ragged tooth sharks in addition to the white sharks. Over the years I am unsure of how many sharks in total Ocearch have tagged.

MG: Tell us about why is it important to tag sharks?
RJ: Tracking the movements of sharks enable scientists to identify critical habitats, the home range, migratory pathways, reproduction related movements. With this knowledge you can guide management and conservation plans, essentially you empower people to design plans that will enable the effective conservation of the population. For instance, the Oceach program illustrated a that the population range of white shark stock of South Africa extends extensively into the exclusive economic zone of Mozambique. As white sharks are not protected in Mozambique, our national conservation plan is ineffective in its objective to conserve the population. The knowledge produced provides 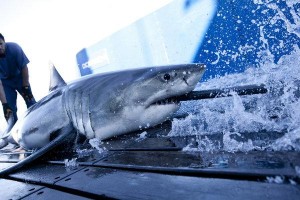 concrete evidence for South Africa’s legislators to take to Mozambique and use as leverage to ensure that Mozambique’s management of white sharks does not compromise our shared resource.

MG: What have your learned so far from the data collected?
RJ: That white sharks residing in South Africa spend a large percentage of time outside of out EEZ and in waters where they can legally be fished. Thus giving a possible explanation as to why there has been no population level recovery despite 22 years of national protection.

MG: Any close calls with the sharks while performing the internal tagging surgery?
RJ: My only concern is to perform the surgery as quickly and professionally as possible and thereby minimize the stress on the shark. Naturally when sharks have become active on the platform during surgery you can get hit and knocked hard. But following this I need to get back to the surgery, regain my composure and complete it successfully. Afterwards you feel and rub the knocks.

MG: Have you had the opportunity to name any of the sharks?
RJ: I named one shark ‘Princess Fi’ after my wife Fiona Ayerst a well known shark conservationists and underwater photographer. After coming up with such a silly name, I was not given too many more chances.

MG: Can you tell us a little bit about Ocearch Global Shark Tracker – Powered by CAT?
RJ: The Ocearch Global Tracker is one of the most revolutionary communication tools ever used by the scientific community to include and inform the wider public about a research project and the results of the research. Essentially it gives everyone instant access to the movements of the sharks tagged and enables them to mine the data to gain a personal knowledge on the behaviour of great white sharks around the world. This level of communication and inclusion is a massive education tool for the public to see past the white shark as a one dimensional man eater.

MG: Can we expect more episodes of “Shark Wrangers” on History this year? 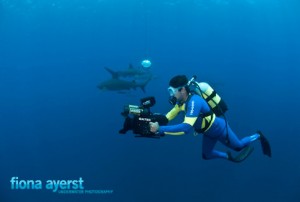 RJ: I am not sure, Chris Fischer negotiates the television deals and would be best to field this question.

MG: How is was it blending the reality aspect of the show with your work?
RJ: I had a lot of respect for the filming and production crew in how they handled the filming. Sure there were elements of sensationalism and building up tension amongst the crew and scientists, however, when it came to the operation with the shark, the production took a total ‘fly on the wall’ approach and did not interfere at all.

MG: What are you doing when you are not playing with sharks?
RJ: I am following my second passion of producing and filming wildlife documentaries. It gets me outside and into wild places, and that is where I love to be.