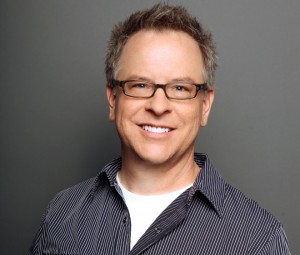 Rich Moore is the director of Disney’s “Wreck-It Ralph”. He is best known for working on TV shows like “The Simpsons” and “Futurama”. “Wreck-It Ralph” has been nominated for both Golden Globes and Academy Award for Best Animated Film. It is set to be released on Blu-ray and DVD on March 5th. Media Mikes had the pleasure to chat with Rich to discuss the film and hopes for a sequel.

Mike Gencarelli: Just wanted to tell you how much I loved this film and that Media Mikes had voted “Wreck it Ralph” the best animated film of the year.
Rich Moore: Thanks. Wow, it was a great year so that is a huge compliment. Thank you that means so much.

MG: With “Wreck-It Ralph” being your feature directorial debut; how does this experience compare from your television work including “Futurama” and “The Simpsons”?
RM: It is different but the same. You know? With “Futurama” and “The Simpsons”, those were amazing projects to work with. Some of the people I worked with on those projects are some of the funniest and most talented people in that medium. My jobs on them were very much like the job I have on “Wreck-It Ralph”. I am telling the best story I can with heart, emotion and humor, while also having characters that we care about and make sure that the audience invests in and identifies with. In that regard “The Simpsons” and “Wreck-It Ralph” feel very similar. I feel like I am right in my element. On the hand, the machine itself here at Disney is big. In order to make these feature films it takes an army of artists to put them together over a long period of time. I feel like a kid in candy shop. It’s like going from having a toy train to running a real train [laughs]. It is fun and really great. It is just wild 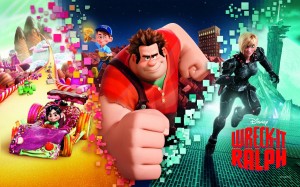 also just being at the studio during this process.

MG: Have you always wanted to be in this position?
RM: When I was a kid, the first film I saw in the theater was “The Jungle Book”. I was five years old at the time and it really got its hooks into me. It affected me in a way that really early on that I wanted to be involved with animation…or as much as a five year old could express that. So to find myself here at this point in my career at Disney Animation, at the place that put the bug in me, and adding my contribution to Disney movies is a spectacular feeling. It really goes down pretty deep.

MG: The cameos in the film are jam-packed but not overwhelming; what was the process for choosing which iconic characters to use?
RM: Well we always wanted to use the ones that felt appropriate to the scene. We definitely went for the ones that we loved as kids and now as adults. Early on in the production, I put up a big bulletin board in the break room with a sign asking what characters needed to be in the movie. We filled up that board quickly

and kept that on hand and used it as a reference throughout. We didn’t just choose them all willy-nilly. It was based on characters that we loved and would need to see in the movie.

MG: You voiced Sour Bill and Zangief of Street Fighter in the film, which are two of my favorites. How did that come about?
RM: Thank You. What is funny about that was that those two performances started out as temporary dialogue – scratch dialogue. When it came time to cast actors in those roles, I was talking with John Lasseter about it, our executive producer, and I told him what I was thinking for Sour Bill and he asked me “Why do you want to change Sour Bill, it perfect?”. I told him it was just scratch dialogue but he told me to keep it in and that it was great. He also said the same thing for Zangief. So I am a reluctant actor. 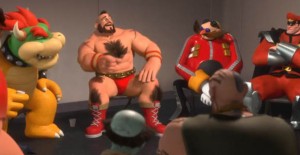 MG: When this film came out, I asked my mom if she was going to see it and she asked “I don’t know much about games, would I enjoy”; how can you address this concern for the non-gamers?
RM: Sure, that was something that I was very concerned about in the beginning. I didn’t want it to be so inside video games that only gamers would get it and enjoy it. It was very important to me that even if you just heard of video games but never played that you could watch the movie and enjoy it as much as a hardcore gamer. I was always checking this aspect as we were developing the story. I had a little core group of people. Some were hardcore gamers, casual gamers and some that didn’t play at all. I used them as a balancing stick to make sure if they were all equally enjoying it and able to relate. Once all those three points lined up, I knew that we got it in a good spot where everyone would be able to enjoy it. It was very important to me that that aspect was front and center.

MG: Well since then she has seen it twice and loves quoting it, especially the Oreo chant [laughs].
RM: It is funny that you can still make a joke about a movie that is over 70 years old and cookie that is over a hundred years old…and it still feels new. 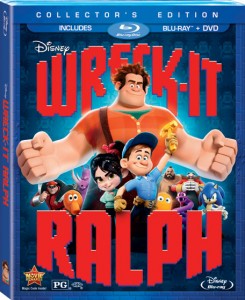 MG: I also liked how you have little fun cameos like Devil Dogs, which are now not being made any more. So it is cool to see them get put in a piece of history.
RM: My experience on “The Simpsons”, Matt Groening would always remind us that the show is not for children, not for teenagers, or adults – it is for everybody. If we are making it too childish then we are losing a big part of our audience. If we are making it too adult then we are losing another part. The stuff that I love working on is the projects that don’t talk down to kids and doesn’t insult the intelligence of the adults. I think that the Pixar movies do that so well, as does the shows like “Futurama” and “The Simpsons”. These can play across and be a true family film or a piece of entertainment and that is my favorite kind of stuff.

MG: Is “Wreck-It Ralph 2” in the cards for you? What can we expect?
RM: The creative team would jump at it in a New York minute. The actors, the animators and myself – we all had such a great time making this movie and working together. We became like a family. It was such a cool experience. We really love these characters. There has been some talk about doing it and I am sure there will be some more talk about it. But we are all keeping out fingers crossed and hoping we get to go back there.