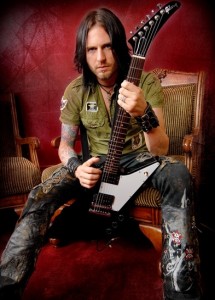 Jason Hook is the guitarist for the heavy metal group Five Finger Death Punch who in the coming months will be releasing their 4th as yet untitled studio album.  More recently at this year’s NAMM convention held in Anaheim, California Gibson Guitars unveiled the Jason Hook signature M-4 Sherman guitar which is the first guitar to bear Jason’s name. Media Mikes was able to talk with Jason recently about the creation of the guitar and several of its aspects.

Adam Lawton: What was your first exposure to Gibson guitars?
Jason Hook: I remember reading the back of the Kiss “Destroyer” album where it said that Kiss uses Pearl drums and Gibson guitars because they want the best. I think that was in 1976. At the time I think the whole band was using Gibsons. I didn’t get my own Gibson until I was in my late 20’s. I bought it in Canada sight unseen. I think I paid about $900 for a used custom. I didn’t know anything about the guitar before I got it. I probably should have held on to that one.

AL: How did the opportunity come about to do your own signature model Gibson?
JH: I know several people who work at the company so I would periodically check in with them. I play explorers which not a lot of people play. I thought that this would be a good lead in to help push this through. It took me a little while to get that point to the right person. Everyone wants something from Gibson so they are very selective about what they give away and who they help out. I had to be patient.

AL: What was it that drew you to the Explorer model?
JH: I own several Les Paul models and they are great guitars however I developed a nerve issue with my right arm. On the Les Paul model there is a hard binding that comes across and falls under that 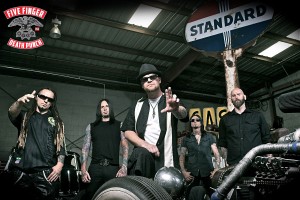 right arm. This was causing my arm to burn while I was playing and really bummed me out. Idecided to try the Explorer and it was perfect.

AL: How much of the design process were you allowed to be a part of?
JH: Surprisingly they wanted to do exactly what I wanted to do. I started off asking them if I could do certain and things and they told me it was my guitar I could do what I wanted. They didn’t resist any of my crazy ideas.

AL: Can you give us the specs on the guitar?
JH: Everything is based off the stock Explorer. I changed the rosewood fret board to a granadillo fret board as it is a very hard and dense wood with not a lot of grain. I wanted a lower profile fret that was also wide. I looked all through the factory but couldn’t find what I wanted. After asking if they had anything else they showed me the wire that’s used on the Zakk Wylde Les Paul’s which was perfect. I literally stole the fret wire out Zakk’s material stash. (Laughs) We are using locking mini Grover tuners which is something different. We also did a bevel on the upper wing of the body as well as

scooping out a portion of the lower wing which allows the player access the higher frets. For pickups we are using a Seymour Duncan JB in the bridge and a Duncan 59 in the neck. Other than the special paint scheme the last thing we did was this special wiring harness. This idea came out of when I was still painting guitars in my garage. I would take the pick guards off to paint the bodies and there is  this channel that the wires sat 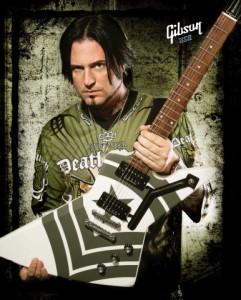 in. I looked pretty gnarly the way it was so I started looking around and found some plastic conduit that I got at Home Depot to wrap around the wires.

AL: When you showed them the wiring what did they think?
JH: They told me that I didn’t have to have that in there as they could route the guitar differently so there would be no channel. I wanted to make it interesting. I think the more bizarre something looks cause people to take notice. I am a big fan of Eddie Van Halen and the stuff he did in the eighties. He was using these pieces of shit guitars that he was making in his garage but, he still played better than everyone else. (Laughs) That I thought was really unique and I said that if I ever got to operate on a professional level I was going to do something similar. My explorer was supposed to be the most unique, ugliest, beat up thing I could create.

AL: Can you give us an update where you are at with the new album?
JH: We are about 65% done. We are shooting for a deadline that is at the end of April, early May. We are working hard every day on this thing. I am at the phase now where I am laying down solos here at my home studio. Generally the first portion of the recording process I am writing and working on rhythm stuff. It’s not till the last quarter that I switch over to doing the other stuff.