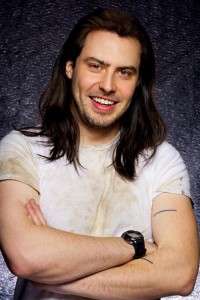 Andrew W.K. is a musician that found fame with his party rock album “I Get Wet”. Since then he has been rocking and partying hard.  His music really take you to a new place of excitement and gets you out of your chair your fit pumping.  He recently announced his new “Human Party Machine Solo Tour” this year.  Media Mikes had a chance to chat with Andrew about the intimate tour, his music and what he has planned next.

Mike Gencarelli: Tell us about your upcoming “Human Party Machine Solo Tour”?
Andrew W.K. : This is going to be a different kind of tour, since it is solo. I did a world tour last year with my band. Nothing is more fun than playing with my full band. I still like doing different kind of shows where there is a more intense intimacy that comes from it with me being on the stage with my keyboard. That is what this tour is about. I have done a lot of solo tours all my career since I feel like when I am up on stage, just me, I feel like it makes me a better performer. I have to draw upon different skills and strength that I have. It is still trying to get to that same place of excitement and energy. Anyway, I have never done a full solo tour around the entire United States.

MG: What are you looking forward to most within the intimate club setting?
AWK: The idea what to pick very small venues almost like bars. So it is really more like a party atmosphere than a concert. It would include places that we wouldn’t normally play and really get that intense and extremely memorable atmosphere and whoever comes to the party. I feel that with these solo shows that the audience, the people that chose to be there, they become my band on nights like this. We are singing together. It is like hanging out with your friends dancing and enjoying music that makes you happy.

MG: How has partying changed for you since you started doing this? 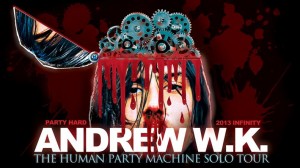 MG: Whenever I hear any track from “I Get Wet”, specifically “Party Hard”, I can’t help but get pumped and ready to kick some ass.
AWK: The music is a great and powerful way to get to a good feeling. A feeling of energy and strength. You have to give yourself credit to because you allowed yourself to find that feeling. People will listen to our music and say its “too loud”. So I am always thankful for people that find good feeling that I am putting out there.

MG: What is the track for that that drives you crazy?
AWK: Really it would be all of the songs. That is why we recorded and released them. If they didn’t get to that place of energy then we would have done it. This particular style of music is dedicated to getting you amped up and super pumped. If the song doesn’t do that for me or the people working on it, then we probably won’t be recording it in the first place. In a way they are all like one song. This one feeling of excitement. If it works to get that then I know the song is working.

MG: Being a fan of “Gundam”, how did you end up working on your album “Gundam Rock”?
AWK: First of all I appreciate you being aware of that album. “Gundam” is popular around the world but a little more obscure here. It is just great music for starters. The “Gundam” corporation, Sunrise, the company in Japan heard another “Gundam” song I had done and 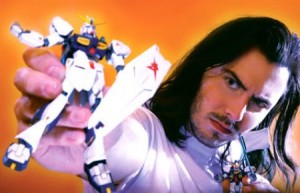 invited me to record this rock album to celebrate the 30th anniversary. It was such a huge privilege and when you have an opportunity like that you don’t even question it. The music is just so good. They are really incredible songs and they definitely made a better musician learning them and playing them for that album.

MG: Having done a few albums specifically for Japan; can you reflect on your worldwide fan base?
AWK: I am very thankful and grateful everyday. I do not think that anyone is more blown away or surprised that any of this has happened but me…or maybe my parents. It is a priveldge and you always want to make the most of an opportunity. I feel so lucky to have them. I just want to keep working harder and partying harder. I also always want to give thanks since there are a lot of other people besides me that are making this happen. Like you Mike, your belief in it, your enjoyment of it and your support over all these years. It is always a group effort to keep it going. It is always very encouraging and humbling at the same time.

MG: On the other side of Andrew W.K.; tell us about your love for “My Little Pony” and being a brony?
AWK: Of absolutely, I am a fan. I have know about “My Little Pony” for years. Since “Friendship is Magic” series came out, it has been a really interesting phenomenon. So many people that I was meeting was telling me about it. Then I got invited to the Canterlot Gardens convention in Ohio, that is what really took it over the top for me. I just like anything where people get really passionate and has that good positive vibe. It is hard to resist that type of feeling.

MG: Also tell us about how you became the official spokesperson for Fresh + Sexy Wipes by Playtex?
AWK: Again, since I moved to New York about 15 years ago, I had this particular mind set, no matter how unusual something seemed or 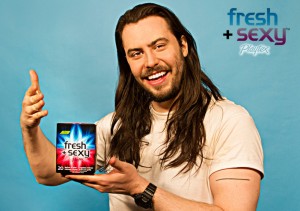 challenging or weird. I had this mindset that I would just say “Yes” to things in my life. I figured my destiny was bringing me in touch with these things and I wouldn’t have the opportunity to do it if I wasn’t meant to. You just follow that kind of instinct, so you are in the right place and the right time in order to do something. So the Playtex people came to be and asked me if I would be interesting in promoting this project. I just thought it was so wild and I couldn’t believe they would want me to do it. So of course because of that I said yes. I also like working on team projects where there are a lot of input and everyone working on their highest level because I feel that I a learn a lot. I want to work as hard as I can at all times and do as much as I can because firstly, it entertains me. I have to keep myself interested in what I am doing and I had never done anything like this before. I learned a lot. It is also a great product. Like for someone that doesn’t get a lot of time to shower or bath as much due to traveling, rocking out and partying, this was a product that I could actually relate to. So I am happy that they took a risk with me.

MG: When can we expect a new album from you?
AWK: Yes and thanks very much for asking about that. I have been working on two albums for several years. It is all about getting that 2-3 months of complete open time to focus on it. That has been very hard to get. I have been working on the songs and the lyrics in whatever what I can. I would think that hopefully this coming winter, I will have that block of time to finally finish it. I really want this new album to be the best thing that I have ever made. I have to figure with my destiny, when the time is right it will happen. I don’t want to rush it. We have a really big and exciting year though. We have a lot of touring and doing a lot of new things. So that is all very exciting! So I look forward to seeing you at the shows and stay tuned!