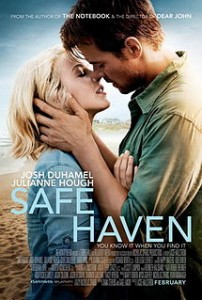 Following in the footsteps of some of the greatest romantic movies such as “The Notebook,” “A Walk to Remember” & “The Lucky One” is not an easy task. All of which are movies based on the romantic novels by the best- selling author, Nicholas Sparks. Safe Haven is a romantic thriller that takes you on a journey of a mysterious woman’s struggle to try and escape her past and find the courage to love again.

Katie ( Julianne Hough) escapes to a small town in North Carolina. While struggling to feel safe, Katie slowly starts to let her guard down and allows herself to make friends and put down some roots. In doing so she forms a romantic relationship with Alex ( Josh Duhamel), a widowed store owner with two young children. Katie’s past is not far behind and slowly starts to catch up with her, threatening her new life and her new found love!

Anyone that has read the book couldn’t have asked for better casting! Julianne Hough and  Josh Duhamel really nailed their characters. They were both close if not exactly who I was picturing in my head when I was reading the book.  The chemistry between Hough and Duhamel was amazing and had their viewers rooting for their romance to succeed. Safe Haven is a romantic thriller that will not only keep you in suspense but has a twist in the end that might even bring you to tears!