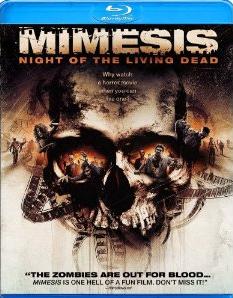 “Mimesis” is a very clever homage to George Romero’s “Night of the Living Dead”…for the first 30 minutes. It plays out scene for scene at first…before it crashes and burns into a modern killer flick. I have to give it to them for trying to be original here but they lost focus in the second half. They also got horror genre favs like Sid Haig and Courtney Gains to make a brief appearance. They are listed on the back of the box as “starring” but one scene doesn’t constitute starring. Horror fans, I would say watch this if you want find it free or on Netflix but otherwise, I would steer clear.

Official Premise: A group of horror fans find themselves unwilling participants in a living nightmare that pays homage to a classic horror film. Seven complete strangers whose only common link is a love for classic era horror films are invited to attend an exclusive “horror fan” party at a remote farm. But as the sun sets, these strangers soon find themselves within a real life version of the 1968 George Romero cult horror classic “Night of the Living Dead”!

The Blu-ray presentation looks good enough with its 1080p transfer. The DTS TrueHD 5.1 track work well with the score and suspense in the beginning. I got tired real quick with the speed up/slow down shots throughout the whole film. This isn’t “The Matrix”, you know! The only special feature listed here is an audio commentary track from the Director/Co-Writer Douglas Schulze and Co-Writer Joshua Wagner. I love their passion for the genre but it still doesn’t make it up for it’s disappointing third act.