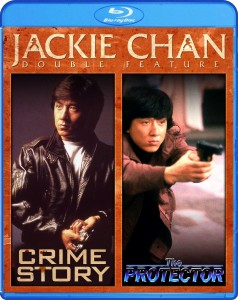 Who doesn’t love classic Jackie Chan? This double feature includes two films: “Crime Story” and “The Protector”. It is great to see Chan fly around without wires or CG effects. The US cut of “The Protector” is good but has never been my favorite of mine or Jackie Chan’s either hence his created his own personal cut with more action and less nudity. Luckily this edition is included in the special features. You can tell that Shout! but some love into this release and they are a real step up from Echo Bridge’s four-pack of Jackie Chan’s features on Blu-ray. If you are a fan of Jackie Chan, then you are going to want to check this out.  Looking for more? Shout! Factory is releasing another Jackie Chan Double Feature “Police Story / Police Story II” this April.

“Crime Story” Official Premise: Jackie Chan stars in one of his grittiest roles ever as a police detective on the edge, who must race against time to solve a deadly kidnapping case. Based on the shocking true story of a billionaire abducted in a bold ambush, and filled with explosive martial-arts battles, Crime Story pulses with tension and excitement. Director Kirk Wong (The Big Hit) deftly combines acrobatic fight choreography with edge-of-your-seat action for this thrilling and dramatic tour-de-force for Jackie Chan.

“The Protector” Official Premise: Written and directed by James Glickenhaus (The Exterminator), The Protector stars Jackie Chan and Danny Aiello (Do the Right Thing) as a pair of NYPD cops sent to Hong Kong to catch a drug lord who has kidnapped the daughter of his former associate. Also starring martial-arts star Moon Lee (Angel Force) and Roy Chiao (Indiana Jones and the Temple of Doom), this thriller features Hollywood-style action sprinkled with Chan’s death-defying stunts.

Shout! Factory has delivered decent but not amazing 1080p transfers here, both presented in their original aspect ratios of 1.85:1.  When I think about classic Jackie Chan action films, I think about the gritty feel though so they work for me to be honest.  They are not perfect but then again neither or the films themselves. The audio tracks on the other hand are much more solid.  “Crime Story” comes with both a Cantonese and English DTS-HD Master Audio 5.1 track. Obviously the original Cantonese works the best personally.  Then there is also a Cantonese and English Dolby Digital 2.0. “The Protector” comes with an English DTS-HD Master Audio 5.1 and English Dolby Digital 2.0.

The special features for “Crime Story” are good but not great. There is an interview with the director Kirk Wong in Cantonese, with optional English subtitles. There are a few deleted scenes also in Cantonese, with optional English subtitles. Lastly there is the original un-subtitled trailer and a US trailer. “The Protector” really delivers the best features on this release. “The Protector: Alternate Cut” is Jackie Chan’s personal cut of the film and is in Cantonese, with optional English subtitles but only in standard definition. “From New York to Hong Kong” is an interview with director James Glickenhaus talking about working with Jackie Chan. “Locations: Then and Now” is a shot featurette showing the shooting location, not narrated and can be skipped. “Behind the Scenes Featurette” is raw shooting footage in Cantonese and not subtitled. Lastly there is the Hong Kong and US trailer included.