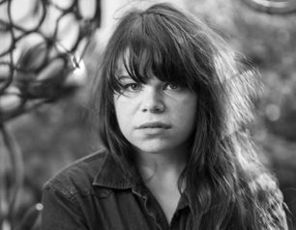 Samantha Crain is a singer/songwriter set to release her 3rd full length solo album titled “Kid Face”. Samantha describes her sound as a mixture of Folk with some Country elements. Media Mikes had the chance to ask Samantha a few questions about the new album as well as how her background in fiction writing sparked her interest in wanting to perform music.

Adam Lawton: Can you give us a little bit of background on your career thus far?
Samantha Crain: Unfortunately it’s not an incredibly interesting story at all. (Laughs) My dad had bought me a guitar when I was younger however I was never really interested in it growing up. I probably taught myself a few chords on it but that was it. I grew up sort of obsessed with writing stories so when it came time for college I went for writing. A couple of years in to that I had a moment where I wanted to get out of Oklahoma as I was feeling a little crowded. At some point I picked up the guitar again and started teaching myself. I began pairing some of my short stories and poems to music and after a little while I began booking shows for myself. This was sort of a means to travel and see new places. My career really came out of finding a way for me to pay my way around the country. It ended up turning in to something that I really love doing.

AL: Around what time did you become a signed artist?
SC: After writing and touring on my own for some time my first EP found its way to Dolph Ramseur owner of Ramseur Records. We ended up speaking and decided to re-release the EP on his label as a means to reintroduce me to those who maybe weren’t able to get one of the handmade copies. Things really came out of being out there and playing a lot of shows.

AL: How does your latest album “Kid Face” compare to your previous work? And did you try anything different this time around?
SC: With my background being in fiction writing I really held on to that with the first two records. As I

have gotten older and been able to experience more things I have been able to shift my writing from being fiction based to being more autobiographical. That’s probably the main difference between my new album and my previous releases. As far as differences go this time around I went back to more of my folk roots. Some of my previous songs had a rock feel to them but I moved away from that and back to how I started. This album is definitely a softer folk/country album.

AL: Does your background in writing tend to lead you to start with the lyrical aspect a song or do you start with instrumentation first and write around that?
SC: When I first started writing songs I had a lot of material lyric wise to work with so I started there. Music was sort of the afterthought. However the longer I do this it seems the songs are less apt to come to me. I have to be really smart about catching inspiration when it comes. I generally collect words or ideas in a notebook.  When I have time to work on songs I will lay all these notes out and try and put them together to form a song.

AL:  Do you have any tour plans set up in support of the new album?
SC: We have a few album release shows scheduled that will feature the entire band that played on the album. Those shows will take us up until the start of the South By South West festival. After that for the full tour we will probably scale the band down some as it is easier to travel that way.