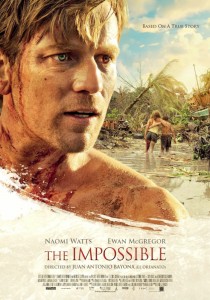 Can it really only be eight years ago this past week when the world changed? On December 26, 2004 a tsunami hit Southeast Asia like a bulldozer, destroying everything in its way. The tragedy was briefly highlighted a couple of years ago in Clint Eastwood’s film “Hereafter,” where one of the characters is caught up in the after effects. But Eastwood didn’t even begin to touch on the horror and devastation that affected those involved and which is featured in “The Impossible.”

Henry (McGregor) and Maria (Watts) are a professional family living in Japan and taking their three young sons on a Christmas holiday visit to Thailand. While lounging one day by the pool they hear a rushing sound coming towards them and, before they can react, soon find themselves under the control of millions of gallons of water. Maria and the oldest boy, Lucas (Holland) are dragged miles away on a roller coaster ride of water and debris. Maria is badly hurt and she and Lucas are found by a small community of locals who treat their wounds and get them to the nearest hospital. Yet, without any word about Henry and the younger boys the waiting for help becomes agony.

An emotional wringer that will leave you exhausted at the end, “The Impossible” is buoyed by a pair of performances certain to be remembered this coming awards season. Watts is outstanding in a role that doesn’t make way for vanity. Her Maria gets her share of bruises and bumps – which can happen when you’re being swept down a flooded street only to be stopped suddenly by a car that happens to float in front of you. Yet despite all of the pain her motherly instinct wills her to stay alive for her family. Holland, who just turned 16, is equally strong in his feature film debut. A young theater star in England, where he played the title role of “Billy Elliot” for almost two years, Holland easily gives the year’s best breakout performance. Still a boy but having to harvest the strength of an adult, Lucas carries the emotions of the audience with him. We cry when he cries…cheer when he cheers.

Visually the film is also a revelation. Director Bayona, whose previous feature work consisted of the supernatural film “The Orphanage,” takes the viewer inside the carnage and devastation. It’s not an enjoyable trip but it is necessary if you hope to exit clean at the end of the film.