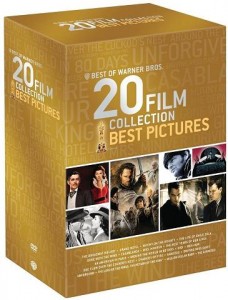 With Warner Bros celebrating its 90th anniversary this year, they are releasing a 20 film collection on DVD focusing on the Best Pictures awarded throughout the years. Looking over the list below, Warner Bros have really delivered some wonderful films over the film 90 years. The films have not only entertained the public but also influences the media in whole. They are broken into three different chapters focusing on various times in film history. The first chapter is from 1929-1942, called A New Era. 1946-1959 is next and is called The Golden Years. Lastly 1975-2006 is labeled The New Classics. This is only the beginning of five genre film collections being released this year. Next up we have Musicals in February, Romance in April, Comedy in July and Thrillers in September. Warner Bros really lined up a very impressive year to celebration their anniversary.

If you are wondering, why not a perfect score for these perfect films that is due to the aspect of DVD. Of course some of these films are not yet available on Blu-ray. Still though with Blu-ray taking over the media world right now, the need and want of the DVD format is second picked and not the preferred way that I would like to view some of these “Best Pictures”. Still this release though is highly recommend for all true fans of quality films. If you prefer Blu-ray and do not mind missing some of these unreleased classics then be sure to also check out “The Best of Warner Bros. 50 Film Blu-ray™ Collection”, since it contains most of these in this collection.

Let’s take a look a the first chapter 1929-1942 (A New Era). I have to say being a big film buff, this is the section that I was excited to explore the most.  I have to admit that I have only see two of these films in this era, “Mutiny on the Bounty” (1935) and “Casablanca” (1942). I am very excited to watch and enjoyed much the stage revue aspect of the 1929 classic “The Broadway Melody”. When I was watching these films though, I wasn’t just sitting there and watching.  I was actually learning and researching about these films and their production, actors, and legacies.  I found that to be the most exciting aspect of this review for me.

Next up is the 1946-1959 (The Golden Years), which a period that I am more familiar with than the prior.  Also I have seen every film during this time except “The Best Years of Our Lives” (1946), which runs just shy of three hours but still a brilliant film.  “An American in Paris” is one of Gene Kelly’s classics. Sticking with musicals, “Gigi” is one of the best ever made for sure.  When it comes to long running time though, let’s get to “Ben-Hur”.  The film clocks in at over four hours but man is it such an adventure and really deserves to be included in this set.  This is also one of the best roles for Charlton Heston in his career.  To be honest though, last year I had the privilege to view this film on Blu-ray and once you have experienced that is hard to go back to the DVD version of the film. There is no doubt that these films are from the Golden era of films and I look forward to revisiting this section quite off.

The last period in this collection is 1975-2006 (The New Classics).  To be honest, I think this could have been split into different eras since I do not really consider films like “One Flew Over the Cuckoo’s Nest” (1975) and “Driving Miss Daisy” (1989) to be considered “new classics”.  They are surely classics but not very new.  In fact it has been a while since I have revisited those films, as well as Amadeus: Director’s Cut (1984) and it has been a real treat.  I forgot how amazing and influential these films are.  “The Lord of the Rings: The Return of the King” (2003) is one of my favorites of all-time and though like “Ben-Hur”, it just really needs to be seen on Blu-ray to really be enjoyed and appreciated.

Wrapping up this release is a 12-Page booklet included, which gives some information on each of the films and Warner’s history over the years. I could see this release being very popular with those that haven’t really crossed over to the high-def format yet.  Some of the films included in the 1929-1942 (A New Era) chapter is worth it for the purchase.  Like I said above though, it is only January and this is only the beginning of Warner Bros year long 90th anniversary celebration.  Stay tuned!

On 1/29/12, WB officially kicked off the 90th Anniversary celebration at the Paley Center in New York. Check out the images below from the event.