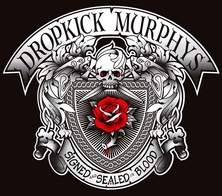 The boy’s from Boston are back with their 8th studio album titled “Signed and Sealed in Blood”. The album is the follow up release to the bands 2011 release titled “Going Out In Style”. “Signed and Sealed in Blood” is the second release to carry the name of the bands own label Born & Bread Records which features 12 new tracks produced by Ted Hutt (Gaslight Anthem, Flogging Molly).

Right off the bat you are catapulted in to the album with a rousing call to arms type of song titled “The Boys Are Back”.  The song seems quite fitting as the album is the bands first studio release in 2 years. From there the sound changes to the more traditional Irish sound the band has been known for as of late. Songs such as “Rose Tattoo” and “Jimmy Collins’ Wake” feature more traditional instrumentation while songs such as “Burn” and “My Hero” are more reminiscent of the bands earlier punk recordings. Probably my favorite track off the album is “The Season’s Upon Us”. Vocalist/bassist Ken Kelly does a wonderful job telling a very tongue and cheek tale of holiday get together’s gone wrong and not so pleasant encounters with family members. It was nice to finally here someone hit the nail on the head by describing the un-pleasantries of the holidays while the rest of the band perform upbeat instrumentation that still makes you feel good about the season no matter how bad it can be.

“Signed and Sealed in Blood” may be a bit too much of a departure from the bands punk rock roots for some listeners however; it’s great to watch a band like Dropkick Murphys progress with the ever changing musical climate. Remembering back to the mid 90’s when I first discovered the band I don’t think they would still be as relevant as they are now if they didn’t break out of the mold that a lot of bands were following in those days. Progression is crucial in the music business as fans don’t want to keep buying the same album year after year. “Signed and Sealed in Blood” does not feature the Dropkick Murphys of 1998 but it does showcase the supped up 2013 edition.