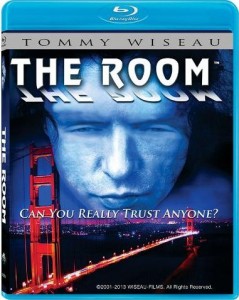 Since “The Room” was released in 2003, it has developed quite a large cult following and has been celebrating midnight screenings ever since then like “The Rocky Horror Picture Show”.  I had the chance to interview with with the man behind the film and star Tommy Wiseau and co-star Greg Sestero and they really support the success of this film and its cult status.  If you know the film, then you know that it is not the best film ever but it has this certain aspect about it that drags you in and doesn’t let go.  It is impossible to watch this film and not laugh and walk away quoting it for weeks to come.  This Blu-ray has been in the works for over a year now and has no studio behind it.  Tommy Wiseau is releasing this film for his fans and only his fans.  If you love this film, you will not be left disappointed overall.

The Blu-ray presentation is quite impressive for an independent release.  The disc art is nice and actually includes art on the reverse side of the cover art, which is rare today and a nice touch.  You can tell that Tommy but a lot of love into this release. This film is his baby and you fans should be quite impressed over with this Blu-ray.  The film was shot with two different cameras at the same time, one 35mm and one HD.  The presentation of footage from these two different cameras are noticeable during here but Tommy has went through and restored a lot the footage to clean it up a bit.  Is there still some noise and fuzz throughout? Yeah, a bit…but this film isn’t perfect and it goes with the territory but for an independent release, I am overall very impressed.  The audio track included works with the dialogue, which is overall clear but only includes a Dobly Digital 5.1 track.  I would have preferred a new DTS HD track but like I said the one included works for the film itself.

If you are looking for the special features to be the draw for Blu-ray, you might be a little disappointed.  The extras that are included are impressive.  There is a behind-the-scenes featurette footage, which is worth checking out.  I love listening to Tommy Wiseau talk about the film and there is a nice interview included here, which is highly recommended.  There are also some deleted scenes, photo gallery and trailers included.  The most interesting feature on “The Room” Blu-ray is the first ever option of combination languages (CL) subtitles.  You are able to view the film with multiple subtitles on screen simultaneously. The languages included are English, French, Spanish, Italian, German. This a neat features since the film has a worldwide cult following.