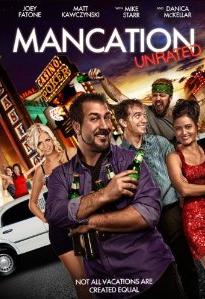 Every since “The Hangover” scored with fans, ever comedy has tried to compare. “Mancation” is no different. The only good thing about this film though is *NSYNC’s Joey Fatone and Danica McKellar from “The Wonder Years”. The film starts off well with using its unrated director’s cut well and then, in so many words, pussies out. It become a tale to find true love and overall gets lame very fast. But the time this film kicks it into gear again, it just seems way too late and way too disgusting.

Official Synopsis: Vince has carefully planned out every aspect of his seemingly successful life until his plans come crashing down around him just one day after his wedding, leaving his three under-qualified friends to pick up the pieces. As they head to Atlantic City for the wildest and most spontaneous weekend of their lives they’ll be sure that this “Mancation” will be one that will never be forgotten!

The DVD includes the film in an unrated director’s cut. The special features included in this release are decent but overall too short. There is a behind-the-scenes featurette called “Jake Cam! with Jake Matthews”. There is a funny commercial for Bonerall. There are some outtakes and about 10 minutes of deleted/extended scenes. “Booch to Boots” is a short feature on one of the characters in the film. Lastly there is a trailer gallery.