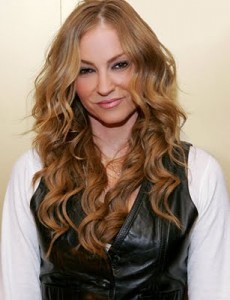 Drea de Matteo is best known for her role of Angie Bolen on ABC’s “Desperate Housewives” and of course Adriana La Cerva on HBO’s “The Sopranos”. She is a special guest star on FX’s “Sons of Anarchy” playing Wendy Case, Jax’s ex-wife and ex-junkie who recently cleaned up her act and is looking to be part of Abel’s life. Media Mikes had a chance to chat with Drea about this role and what we can expect.

Adam Lawton: Tell us how you originally got involved with the show in getting cast for the role of Wendy.
Drea de Matteo: Originally, I came with John Linson before the show was even–I don’t know if it was written or if it was–I don’t know what was going on. I know that I came with John and he introduced me to Kurt. Originally, the character was going to die in the pilot. Then when I decided to do it they kept her alive and I’ve been there ever since but back and forth because I couldn’t fully commit to being on the show at the time. So I was off the show for a while and became a huge fan of the show while I was off of it. Then I just started writing Kurt and Katey [Sagal] and thinking, oh my God, I can’t believe what’s going on. When does the next season air? I was like, and I want to come back. You guys have to figure out Wendy’s turn. So I came originally with John. Then, once it became Kurt’s show they wove me in and out when possible.

AL: Okay. Now, being that you’ve been back and forth, on and off the show, what’s been the most difficult part of playing the Wendy character because when we do see her it’s always a dramatic change from the last time we saw her.
DDM: Well she’s been in recovery. So it’s like it’s watching a child grow up to a certain degree. I think in the very beginning of the series she was extremely, extremely vulnerable. At first she was a mess. Then she was sober and a raw nerve. Now she comes back with her confidence intact and not wanting to stir any … up except for being a responsible party. It seems that the whole entire world has imploded and she’s going to have a hard time maneuvering within it because nobody’s stable over there. She’s now become the face of stability, which is kind of funny.

AL:Who do you think is the more powerful couple; Christopher and Adriana or Jax and Wendy?
DDM: Oh boy. Jax and Wendy? I would probably compare Adriana and Christopher to Jax and Tara maybe, because Wendy is not around enough. Oh boy, the more powerful couple? I’m going to have to go with Jax and Tara only because, I mean, after all Christopher had Adriana killed, you know. It doesn’t get worse than that. Adriana was very weak. Tara; she’s a force to be reckoned with.

AL: You have said before they were originally going to kill the Wendy character off in a pilot. With them deciding to keep the character were you allowed to kind of develop it from that point, or were the scripts just given to you and you kind of went on what they told you?
DDM: Well, Kurt’s a great writer, so they don’t need me. They didn’t me to say, “Well, this is what I want to happen to ‘Wendy.’” When you go into a series like this I’m sure Kurt had the entire season, the first season, outlined for himself and where it was going to go. My character was never a part of where it was going. It was all about Tara and Jax. So, I guess, once they kept me alive the goal was to just sort of have me there as like this thorn
on everybody’s side. Then I couldn’t stay on. So they just put that story to rest which was perfect because I went away to treatment anyway. So, yes, I didn’t really develop. The writer’s tend to write around the actor and their style to a certain degree as long as it’s keeping with what they’re writing about. So I know with Adriana, when I did Adriana, David Chase would do that with me a lot. I don’t know that Kurt did that with Wendy, but I think bringing her back as a strong character and it’s also very much who I am in real life. I wouldn’t say that I was involved in development. I mean, TV is a writer’s medium 100%, and the writer’s king. We all just need to understand that. It’s not a director’s place. It’s not for the actors. It’s really all about those writers.

AL:Now, ultimately, we know Wendy’s goal is to be in Abel’s life. Do you think there are any ulterior motives there now that she is clean, sober and seeing for the first time really with clear eyes a vision how the club’s working. Does she still want to be a part of that, or is she just looking to get scott free with her son?

DDM: I don’t think she’s looking to be a part of a club or to be part of that community. I definitely think that she’s looking to be a part of his life and to do it in a way where she’s not causing drama. I think she’d like to just get along with everybody. I think that–and anybody in the program would… I think she’d like to able to make amends to all of them, mostly to her son, and to be in his life. Even if it meant she couldn’t say, “I’m your mom,” but to just be in his life. Eventually, when he’s older he’s going to want to know who his real mom is. More than anything, I think that she’s looking for stability, not drama. I don’t think she has ulterior motives. I do think that if she’s pushed and manipulated and blocked out that you will see a side of her that…it’s not even so much that it’s an unstable, unsavory side. It’s she’s a mama and that’s her baby. She went and took care of herself in order to be able to come back and reclaim what was hers. So you can’t keep a mom away from their baby for too long.

AL:Do you find that there’s a big difference in shooting between what’s done on FX being a cable channel than your HBO, your Pay-Per-View channel, do you see that there’s a difference? Obviously, you can do a little bit more on HBO but shooting-wise, is there any difference or anything like that?
DDM: Yes. You can’t say f… That’s difficult for me. It’s difficult for a biker show, I would imagine. When you say, “Get the hell out of here.” But you really just want to say, “Get the f… out of here.”

AL: There’s so many similar elements between the Sopranos and Sons of Anarchy being one’s a gang and one’s mob. They’re all tight knit families and trying to cover that on a regular television channel.
DDM: The shooting is very similar. Sopranos, look, it was a whole different ball game. It was the first of its kind. We set the structure for it. Long shooting weeks, tons of money going into a show. That was brand new, man. Nobody knew what that was on cable yet. So all of these shows, Breaking Bad, you’ve got Mad Men, Sons of Anarchy, Rescue Me, like all of these are great shows. No one ever knew a TV show would be treated like a small film every week, big budgets and whatnot. Sopranos we shot 16-day weeks. Here we shoot 7-day weeks, 8-day weeks. I think that’s what they do. I don’t know.

AL: A lot of people really love the Wendy character and how she’s evolved. So I’ve had a few fans wanting me to ask, would it be possible for Wendy to be around a little bit more, maybe have a different love interest? Or do you just not see the role…?
DDM: Well, I’m going to have to say that’s totally 100% up to Kurt. I’m back now. I’m open and willing and ready to do whatever they want me to do. I took off for a long time there but I did a couple of episodes this season. I’m open to doing as many as Kurt thinks would benefit his story, the story he wants to tell, for sure.