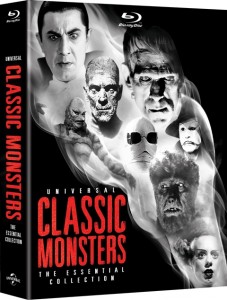 When it comes the the Classic Monsters, there is hands down nothing better in horror.  It’s all starts from these films.  This Essential Collection includes eight of Universal’s most popular monster films, including “Dracula” (1931), “Frankenstein” (1931), “The Wolf Man” (1932), “The Mummy” (1932),  “The Invisible Man” (1933), “Bride of Frankenstein” (1935), “The Phantom of the Opera” (1943) and “Creature from the Black Lagoon” (1954).  These films have been digitally restored and released on Blu-Ray for the first time ever in this release. These are some of the most iconic films in history with creatures that are simply timeless.  Of course Universal timed this release perfectly to compliment Halloween.  And what better way to get in the mood for the holiday than enjoying these great films in beautiful in perfect high-definition picture and perfect high-definition sound for the first time ever.

This wonderful release not only comes packed with goodies but also looked fantastic.  It is very sleek and sharp.  The inner case holding the discs comes on nice stock and with beautiful art displaying for each film.  Also included in the case is a collectible 48-page book, perfectly titled “The Original House of Horrors: Universal and a Monster Legacy”. This book features some really amazing behind-the-scenes photographs, original and foreign posters, trivia facts and much more.  This year is the celebration of Universal’s 100th Anniversary and they just went all out on this release. Each classic monster film is also accompanied with a massive amount of bonus features. Also a major draw for myself included is the rarely seen “Drácula”  [Spanish-language version], now also in high-def.  But the disc that I rushed to put in first and watch has to be the 3D Blu-ray presentation of “Creature from the Black Lagoon” (1954).  This is the first time that this film has been released in 3D, since it’s original theatrical release.  Wow, let me tell you I think this was worth the purchase alone.

When I put in the disc for “Dracula”, I have to admit I was rubbing my eyes since I was just blown away by its restoration.  This film is 81 years old…81 years! The film look glorious on Blu-ray, I have seen films together that don’t even come close to this scale of greatness.  The same is the case for the rest of the films as well, I seriously couldn’t find anything wrong with this restoration.  Each film is presented in its 1080p transfer in full frame 1.33:1 aspect ratio.  Each film also comes with a perfect DTS-HD Master Audio 2.0 Mono track.  I couldn’t have wished for a more perfect audio presentation for these films.  Universal has really put a lot of love into these since I believe that they are fans of these classics themselves and are doing it as fans.  Trust me, they could have just plopped these films onto Blu-ray and you know that we still would have bought it, no questions.  But with this release, you know you are really getting both quality and quantity.  All fans of these classic films, should be left with their most open and their tongue rolling out at the screen. 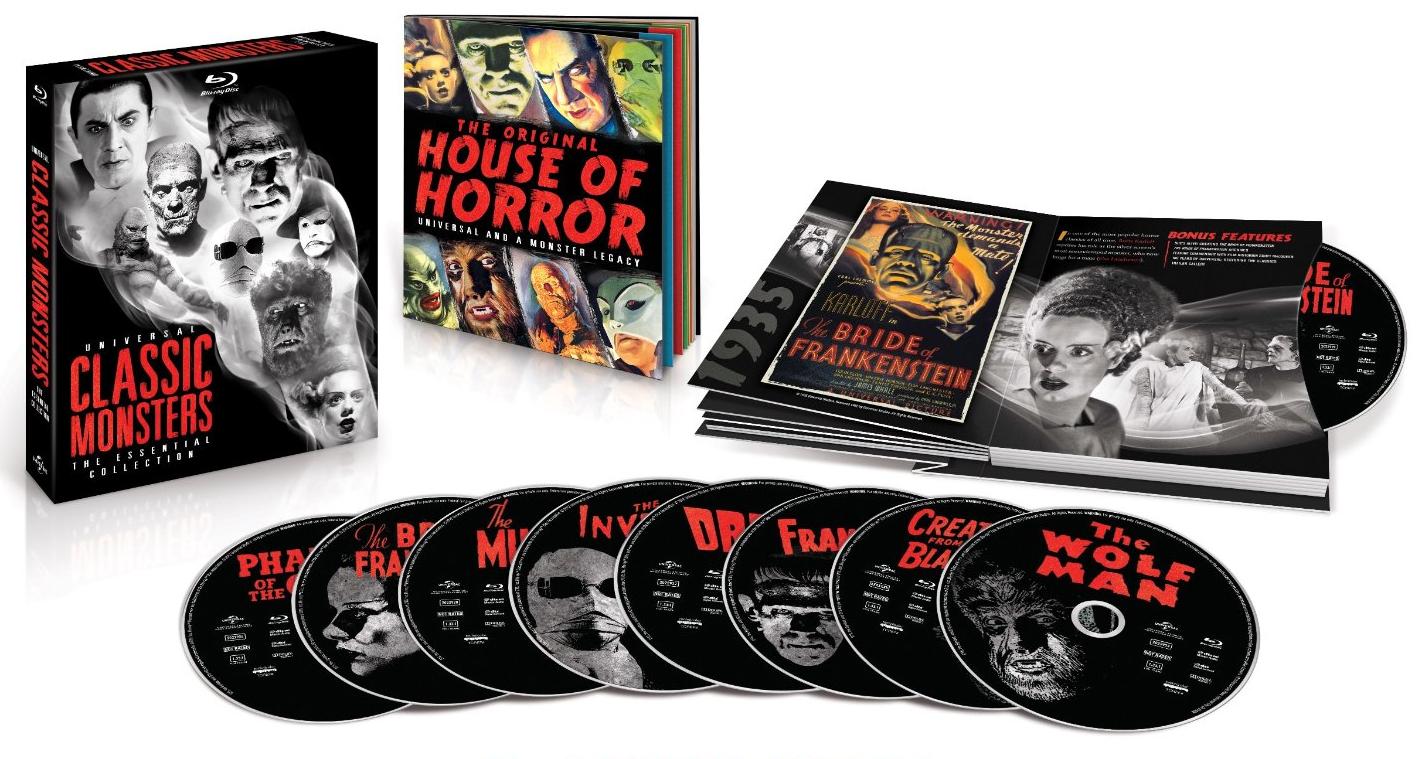 Now let’s get to the massive amount of special features.  Which are presented in a variety of formats including 1080i/p and 480i/p.  They are also mostly include a Dolby Digital 2.0 audio track, “Dracula” and “Creature” also include a DTS-HD Master Audio track for the extras. The extras on “Dracula” are easily the spotlight (if you don’t count “Creature” in 3D as an extra).  “Dracula: The Restoration” is a new featurette available for the first time and it is amazing to watch how this film was done. The 1931 Spanish version of “Dracula” comes with an introduction by Lupita Tovar Kohner.  There are also three other featurettes covering this production and legacy including “The Road to Dracula”, “Lugosi: The Dark Prince” and “Dracula Archives”. I really enjoyed watching the film with the “Monster Tracks: Interactive Pop-Up Facts About the Making of Dracula”.  There is an extra focusing on the brilliant Score by Philip Glass performed by the Kronos Quartet. If you are of a fan of commentary tracks, this contains two completely different angles.  The first is with Film Historian David J. Skal and the second is with Steve Haberman, Screenwriter of Dracula: Dead and Loving It.  Lastly we get a trailer gallery, which closes the extras for “Dracula”.

Next up is “Frankenstein” and it also delivers some really great features. First off we have “100 Years Of Universal: Restoring the Classics”, focusing on the companies plan to restore and release numerous films this year.  There are also a bunch of great featurettes including “The Frankenstein Files: How Hollywood Made a Monster”, “Karloff: The Gentle Monster”, a look into the world of “Universal Horror” and lastly “Frankenstein Archives”. Like “Dracula” there is also a great “Monster Tracks: Interactive Pop-Up Facts About The Making of Frankenstein”. Boo!: A Short Film, which is comedy directed and written by Albert DeMond. It contains clips of famous horror films including The Cat Creeps (1930), Frankenstein (1931) and Nosferatu (1922). There are two very interesting and details audio commentaries with Film Historian Rudy Behlmer and Historian Sir Christopher Frayling. Lastly we get a trailer gallery.

The Mummy” follows the similar path of the others as well. First off we have “100 Years of Universal: The Carl Laemmle Era”, which I highly recommend. There are also a bunch of great featurettes including “Mummy Dearest: A Horror Tradition Unearthed”, “He Who Made Monsters: The Life and Art of Jack Pierce”, “Unraveling the Legacy of The Mummy” and lastly “The Mummy Archives”. These featurettes were among some of my favorites. “The Mummy” also includes two of the best audio commentaries with Rick Baker, Scott Essman, Steve Haberman, Bob Burns and Brent Armstrong and also Film Historian Paul M. Jensen. Lastly we get a trailer gallery.

Are you tired yet of special features? Besides we are just getting started, with next up “The Wolf Man”. First off we have “100 Years of Universal: The Lot”, this shows the lots in the good ‘ole days.  There are also a bunch of great featurettes including “Monster by Moonlight”, “The Wolf Man: From Ancient Curse to Modern Myth”, “Pure in Heart: The Life and Legacy of Lon Chaney, Jr.”, “He Who Made Monsters: The Life and Art of Jack Pierce” and lastly “The Wold Man Archives”. These are some really quality featurettes and left me howling (What…too much?). “The Wolf Man” also includes an audio commentary track Film Historian Tom Weaver. Lastly we again end with a trailer gallery.

“Phantom of the Opera” has always been a favorite creature of mine.  I have always loved the makeup in this film.  There is one featurette for this film “The Opera Ghost: A Phantom Unmasked”, which is good enough for me.  There is also some Production Photographs, liked “The Invisible Man” and a repeat for “100 Years of Universal: The Lot” from “The Wolf Man”. There is also a commentary track with Film Historian Scott MacQueen and a theatrical trailer included. Last up but not least is “Creature from the Black Lagoon”.  This includes both the 2D and 3D versions of the film There is also one featurette “Back to The Black Lagoon” and a repeat from the previous two “100 Years of Universal: The Lot”.  There are also Production Photographs, an audio commentary track with Film Historian Tom Weaver and Trailer Gallery included.