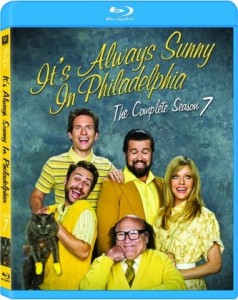 Official Synopsis: In season 7 see the Gang prepare for the apocalypse, hit the beach at the Jersey Shore, produce a child beauty pageant, and take a walk down memory lane at their high school reunion. As they say, some things never change. So prepare for more depraved schemes, half-baked arguments and absurdly underhanded plots to subvert one another.

First airing in 2005, It’s Always Sunny in Philadelphia has never failed to tackle timely subject matters through the uniquely twisted eyes of the Paddy’s Pub gang. Season seven, which kicked off with a dead hooker (“Frank’s Pretty Woman”) and covered everything from social networks to child beauty pageants, was no exception.

If Sweet Dee’s (Kaitlin Olsen) pregnancy was the notable addition to the sixth season, season seven was the year of “Fat Mac.” Series creator and executive producer Rob McElhenney put on fifty pounds for the sake of trying out its comedic possibilities. While McElhenney has shed the weight in the current season which began on October 11th, the decision paid off in spades in episodes on this set such as “How Mac Got Fat” and “The Gang Goes to the Jersey Shore” (where Mac and Danny DeVito’s Frank introduced the world to getting drunk off of Rum Ham).

The Jersey Shore episode was definitely a season highlight in a year where the gang was so often found outside of their base at Paddy’s pub–a major leap forward for Charlie Kelly (Charlie Day), who up until this season just couldn’t seem to make it out of the city limits successfully. Other season highlights include “Chardee Macdennis: The Game of Games” featuring a twisted combination drinking-board-physical-challenge game that only the Always Sunny gang could devise, and the two part High School Reunion finale. The latter of which corralled, for all intents and purposes, the rogues gallery of Always Sunny nemeses from past seasons including guest stars Judy 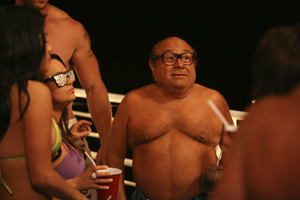 This season does find some weaker moments than earlier years of Always Sunny such as the flashback-heavy “Frank’s Brother”, however I can’t think of another show that is as consistently hilarious and surprising, especially after seven years. As far as sitcoms go, it also has one of the highest rewatchability factors as the writers continue to flesh out this alternate universe Philly with supporting characters and callbacks to past plots.

The extras on the Blu-Ray set are not as extensive as some of the previous sets, featuring four episode commentary tracks (of thirteen episodes), an enjoyable blooper reel and a drunken tour of Philly with recurring character Artemis. One misses the behind the scenes featurettes from past releases. On FX, the show is aired in HD and continues to look and sound great on this Blu-ray transfer.