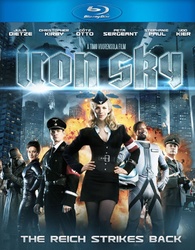 “Iron Sky” had me locked in from the minute I read its premise.  I mean, Nazi’s on the dark side of the moon, how can you go wrong? Well this film doesn’t really deliver much in the laughs department…but it definitely makes it up in the visual effects department. There is some really top-notch CG work here, it reminded me a bit of this year’s “Lockout” as well. The film has Udo Kier playing the Führer but does not use him to his potential and let’s just say he doesn’t stick around that long. Nonetheless, I honestly think that this film is worth checking out JUST for the visual effects.  The word is that there is going to be a prequel and sequel for this as well, so this story isn’t done yet.

Official Premise: In the last moments of World War II, a secret Nazi space program evaded destruction by fleeing to the Dark Side of the Moon. In the intervening 70 years, the Nazis constructed a gigantic space fortress with a massive armada of flying saucers. Their plan: travel back to Earth and re-colonize the planet. Now, mankind’s greatest enemy is no longer history as the Reich strikes back in this eagerly-anticipated worldwide box office phenomenon which has enjoyed a U.S. theatrical release – demanded in over 70 markets. When American astronaut James Washington (Christopher Kirby) puts down his Lunar Lander a bit too close to the secret Nazi base, the Moon Führer (Udo Kier) decides the Fourth Reich must act, so two Nazi officers, ruthless Klaus Adler (Götz Otto) and idealistic Renate Richter (Julia Dietze), travel to Earth to prepare the invasion. In the end, when the Moon Nazi UFO armada darkens the skies, ready to strike at the unprepared Earth, every man, woman and nation alike, must unite to save humanity!

“Iron Sky” looks awesome on Blu-ray. It’s 1080p transfer looks amazing in its 2.35:1 aspect ratio. Since the film is jam-packed with action, the DTS-HD Master Audio 5.1 audio track really delivers. The special features are not as impressive though, but still decent. There is an audio commentary track with Producer Samuli Torssonen and Director Timo Vuorensola. There is a lot of focus on the visual aesthetics. “Making of Featurette” focuses on the production and runs just over 15 minutes. There is another look Behind the Scenes which focuses on various featurettes focusing on the film. Lastly there is a theatrical trailer and teasers included.