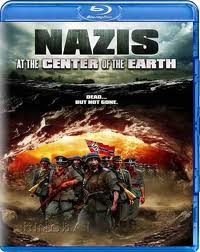 With a title like “Nazis at the Center of the Earth”, how can you obviously not be attracted to this film. Throw in zombie Nazis and a robot Hitler and you are in for a real treat. The Asylum is known for these low-budget gems. This film is made with a smirky grin and is one hell of a great time. The special effects are not bad for a film made for under $500K and do I need to repeat there is a robot Hitler in this film. If that doesn’t make you laugh and drawn to this film then this is not for you obviously.

The film follows a group of researchers in Antarctica who fall through the center of the earth and are abducted by a platoon of gas-masked Nazi soldiers. They find that in this hidden continent in the center of the Earth, they discover that Josef Mengele and group of surviving Nazi soldiers are plotting the return of Hitler using advance technology.  They are also planning the invasion of Earth in a UFO spaceship in order to create a Fourth Reich. Sounds fun right?

The Blu-ray looks and sounds great for this low-budget film. The 1080p transfer looks sharp, clear and works well with the film’s visual effects and action scenes. The audio works well with its Dolby Digital 5.1 track and rocks it with the action scenes. I commend Asylum for continuously releasing their films on Blu-ray and really embracing the format even though the film’s are low-budget.

The special features are also decent like the film. There is an audio commentary from Joseph Lawson. It is very entertaining and a real treat. Must listen for fans of the film. There is a brief featurette about the film’s Pre-Production featuring cast and crew interviews. There is a another feature called “Cast & Locations” which focuses on the shooting locations. There is a featurette on the film’s Production looking into the special effects used in the film. Lastly there is a funny Gag Reel and additional trailers for titles from The Asylum.