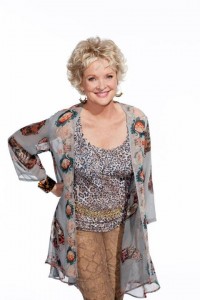 Christine Ebersole is well-known performer & two-time Tony Award winner from the 2001 Broadway revival of “42nd Street” and 2006’s “Grey Gardens”. She is currently playing the role of Carole on TBS’ hit comedy series “Sullivan & Son”. Christine took out some time to chat with Media Mikes about her role in this very funny show and what she enjoys most about performing on stage.

Mike Gencarelli: Your are a such a well-known performer & two-time Tony Award winner, how did you get involved with a show like “Sullivan & Son”?
Christine Ebersole: I think what really convinced me was that it was funny. That element really struck me when I first read the script. The show also has heart. I really loved that.

MG: All of the cast that I’ve spoken says that Carol has some of the best lines in the show.
CE: I feel like it is a total feast. I am thrilled beyond words. The people I work with all enjoy each other’s company. We basically laugh all day and get money at the end of it. (Laughs) It’s awesome!

MG: You worked with Brian Doyle-Murray back on “Saturday Night Live”, how was it working with him again?
CE: After 30 years, we finally got to work with each other again. To still both be players at our age is just great. It is all gravy.

MG: The episode “Creepy Love Song” features you singing with Owen Benjamin was so hysterical, how many times did that take to shoot?
CE: Our characters have a childlike innocence to them which I think allows us to get away with all the things that we do. Those characters are just having fun.

MG: What has been one of your favorite experiences from shooting season 1?
CE: I am hard pressed to pick just one. Even when I don’t have a lot of scenes in the show I am just so thrilled to be a part of it. It doesn’t matter if I have more or less lines. Of course you always want to be the center of attention but when you are not you can revel in the joy of the person who is getting the attention. Things like this don’t happen all the time.

MG: How does working in front of a live studio audience compare to the audiences from your live stage work?
CE: It really is the closest thing to working in front of a stage audience. With television you are allowed to mess up and do things over. On stage you can’t do that. It’s very close to having that energy that fuels you. It’s great having that barometer to gauge how funny things are.

MG: Can you tell us about some of your upcoming live performances?
CE: I am going out performing a show I did at the Carlyle a few years back. The show is about finding eternal youth. I will be doing songs from “The Great American Song Book” and telling true stories about my life.

MG: What do you enjoy most about performing?
CE: For me it is the audience. The group I am working with right now is also really great. Taking everything in and seeing the audience enjoying themselves is what it’s all about.

MG: Tell us about your role in the film “The Big Wedding” and working with the great cast?
CE: The film was supposed to come out in the fall however it has been pushed to next spring. I think they want to work more on the publicity. The film is really beautiful and was written by Justin Zackham. The cast is also pretty amazing. I play the mother of the bride who is played by Amanda Seyfried. The film is just really fun and sweet. The best part was I got to write and perform a song called “Gently Down the Stream” which will play at the end of the film. Don’t leave when the credits come on or you will miss the song.