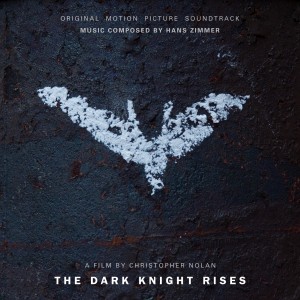 Hans Zimmer has worked on every score in Christopher Nolan’s Batman trilogy along with James Newton Howard.  On “The Dark Knight Rises“, he takes this task on solo.  It ended up but being a decent but not outstanding finale score to a fantastic trilogy.  “The Dark Knight” score definitely trumps this one by quite a bit, sort of like the film does as well.  Normally, I really do love Hans Zimmer’s work but overall it is not his best work.  I just don’t see myself spending a lot of time revisiting it like I did with his past work like “Inception”.  Also there were a definitely some mastering and clipping volume issues on a bunch of tracks. Despite my feelings on the album, it is still a big success charting at #7 on the Billboard top 200 making it the first score in over 10 years to break the top 10!

The score runs a very short 43 minutes and the only real notable track is “Rise”.  If the whole album played as epic on this track, then the whole album would have benefited. “Rise” also is the final track on the album and in fact possibly the last Batman track from Zimmer.  The song takes it time getting started but really gets epic and runs a nice 7+ minutes. But it is so good I just wish it was longer.  I do see myself leaving this song on my iPhone for many months to come.  Although not able to be reviewed, there are 3 additional tracks available for download and 2 are exclusive to the CD: “Bombers Over Ibiza (JunkieXL remix)”, “No Stone Unturned (exclusive)” and “Risen From Darkness (exclusive)”.  There is also an Extended Original Motion Picture Soundtrack available but I am not sure how much it could improve the overall score. Overall, if you are a die-hard Batman fan, you might enjoy this final chapter in the trilogy…or at least keep “Rise” on loop.