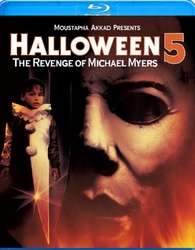 After the cliffhanger of “Halloween 4: The Return of Michael Myers”, the series takes another downfall. Although the fifth installment is still a decent film. The film also features some great gore from our buddies over at KNB EFX Group. The film has been full re-mastered and like the recent release of “Halloween 4”, it is definitely an essential upgrade from the previous DVD releases. Personally I am more excited about Scream Factory’s upcoming releases for “Halloween 2” and…yes…even “Halloween III”. If you are a fan of the series then this release will be a must.

“Halloween 5” looks very sharp and clear on Blu-ray just like “Halloween 4”.  It’s 1080p transfer is impressive with an aspect ratio of 1.85:1.  The audio track, Dolby TrueHD 5.1 is also surprisingly a lot better than the fourth film also. The special features does include a few new items unlike “Halloween 4”.  I am not sure why “Halloween 4” promised a bunch of new extras but didn’t deliver on the release.  This release is still missing the “Inside Halloween 5” featurette and the intro from Danielle Harris and Ellie Cornell from last DVD release.

The special features include a few ports from previous DVD releases, along with the new content.  I am a confused though since the packaging contains a bunch of typos and mismatched the names for each commentary.  Who was the proofreader for these releases? There is an audio commentary with director Dominique Othenin-Girard and actors Danielle Harris and Jeffrey Landman, worth checking out.  The star of this release is the audio commentary with actor Don Shanks aka Michael Myers and moderated by author Justin Beahm, this is new for this release. I also enjoyed the 17 minutes mix of raw production footage in “Halloween 5: On Set Footage”, a must for fans.  Lastly there is a the original promo trailer included.