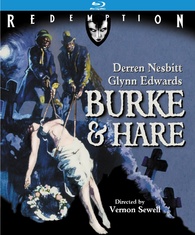 “Burke and Hare” is directed by Vernon Sewell, known best for “Ghost Ship” and “The Blood Beast Terror”.  This classic dark comedy/horror film has been newly remastered in HD and is the first time ever released on Blu-ray!  The film shows its age a little on Blu-ray but still manages to entertain with its campy humor. Kino/Redemption Films continues to release this classic gems and gets props for at least trying.  I would say that this release is for hardcore horror fans strictly and personally I enjoyed John Landis’ recent remake of this quite more.

The premise for the film follows, a pair of low-life thugs Burke (Derren Nesbitt) and Hare (Glynn Edwards), who deliver human specimens to the Edinburgh Medical College. Though they have their unique way of retrieving the bodies often by robbing the graves of the recently dead.  Though due to the lack of available options, the pair turn to murder to continue the flow of bodies.

“Burke & Hare” looks decent with its Blu-ray1080p transfer but not amazing.  The film is presented though in its original aspect ratio of 1.66:1  I am assuming that the 35mm wasn’t in the best shape and even though Kino remastered the film, there weren’t any extensive restoration done.  The film’s audio track included is LPCM 2.0 track, it is also decent but nothing amazing. It

The special features are a little light as well for this release.  There is a short documentary called “Grave Desires: Corpses on Film”, which runs just barely 15 minutes. It features expert insight by Dr. Patricia MacCormack into grave-robbing and cadavers from the film.  Francois Pascal is featured in a new interview, in 1080p, chatting about  how she got involved.  Lastly there is trailers for other Redemption releases.