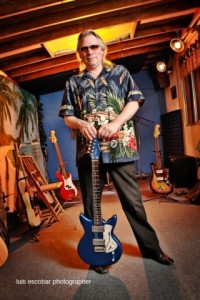 Merrell Fankhauser is one of the innovators of instrumental surf music. He recently released two volumes of “Tiki Lounge” DVDs and a new “Best Of” collection through Gonzo Multimedia. Media Mikes had a chance to chat with Merrell about his music and his plans for the future.

Mike Gencarelli: There is a real lack of surf music in today’s music, how can you reflect?
Merrell Fankhauser: I still have been doing surf music, Mike. Disc jockeys and radio stations all across the United States and in Europe remember me from the hey-day of surf music. In the late 80’s there was a resurgence of surf music and what members were left from The Impacts we got together in ’89 and had an album come out in ’94 called “Surfin’ 101”. Then the movie “Pulp Fiction” came out and the label we were on re-issued our albums. I still get emails requesting more instrumental surf music. So “The Impacts” ended up doing three CD’s from late 80’s through the 90’s. So in 2000 I did one called “Rockin’ and Surfin'”. That led Volume 2 & Volume 3 in 2003 and 2004 and now I am working on Volume 4.

MG: What do you enjoy most about touring still today?
MF: I play with my son Tim now and I am producing his first solo album. We sing good harmony together. He is an awesome guitar player. We are having a lot of fun playing concerts. We recently got together with a band I used to play with The Rebels, who had the song “Comanche” in “Pulp Fiction”. We were totally rocking out. It was a real blast.

MG: Tell us about your recently released “Tiki Lounge” Vol.1 & 2 on DVD?
MF: I started out in 1991 doing a show called “California Music”. It was broadcast out of NY and it went out to 150 stations out of satellite. A lot of my old 60’s pals came out and we chatted and then jammed a little. I did that show till around 1995, since I was doing a lot of touring. But I had a lot of interviews in my archive. One day after coming back from Hawaii and touring with Willie Nelson, I looked out on my patio, which is a Tiki themed and I thought to myself “I should do a show called Tiki Lounge”…and that was 11 years ago, Mike. It is a laid back Hawaiian style show and there really isn’t anything like that out now.

MG: Tell us about working with Gonzo Multimedia and your recent “Best Of” collection?
MF: I owe a lot to the head of Gonzo Multimedia, Rob Ayling. It’s been really nice working with them. It was his idea to do the “Best of” collection. I have over 30 albums of material so I started going through them all. It was very difficult what to keep and what not to use. I found a few unreleased tracks in my archives on a few two-track recordings that I found. A lot of that ended up on the “Best of”.

MG: What do you have planned for 2012?
MF: I got releases on different labels coming out and scheduled well into next year. This summer, Gonzo is going to be be releasing “Area 51 Suite” album with bonus DVD”. At the same time, I have a song with drummer Ed Cassidy from Spirit. I have a song with him called “Two Guys from the 60’s” coming out on a Sky Saxon (of The Seeds) tribute CD box. I also got a Greek label that wants to put out a rarities with outtakes etc release together. So combine that with a lot of touring and my TV show, so I am keeping real busy!