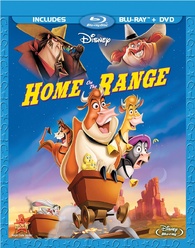 “Home on the Range” was the last the original hand-drawn Disney films, before “The Princess of the Frog”. It was a disappointment at the box office and with audiences. Personally, I thought the film was ok but nothing special. In fact, watching this on Blu-ray was the first time I saw it since theaters back in 2004. When revisiting this film, it proves to be decent, backed with some fun music (thanks Alan Menken) and even though not Disney’s best is still worth picking up for the mega-Disney fans.  I still enjoy watching hand-drawn animation even if it is not the best film.  There is just something about the way hand-drawn animation looks on Blu-ray, even though computer animated is so polished and perfect, these films hold a certain look and feel.

When it comes to Disney Blu-ray’s, they are always known for delivers the best video on the format. “Home on the Range” looks very colorful and sharp but overall not the best I have ever seen. It is still very impressive and a nice upgrade from DVD. Disney’s DTS-HD Master Audio 5.1 surround track is also very impressive and works really well the original songs written by composer Alan Menken. This release comes in a combo pack with a Blu-ray and DVD disc within.

The special features included are worth checking out but are presented only in standard definition.  There is an audio commentary with Producer Alice Dewey and co-writers/co-directors Will Finn and John Sanford, which is a good time all around.  “Trailblazers: The Making of Home on the Range” is a production overview covering story development to character design to voice casting to to the songs and music.  “Art Review” follows art director David Cutler and background supervisor Cristy Maltese discussing about creating the look and feel for the film.  There are four deleted scenes, which are all unfinished with intros from the co-directors. “A Dairy Tale: The Three Little Pigs” is a cute animated short narrated by Judi Dench.  There is a music video for “Anytime You Need a Friend,” performed by the Beu Sisters. “Yodelmentary” is a very short piece teaching kids to yodel. Lastly “Joke Corral: Herd of Jokes” is a gag reel basically through yodeling.