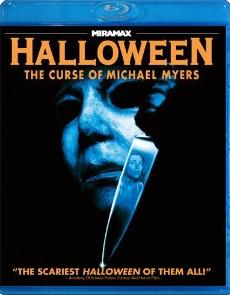 “Halloween: The Curse of Michael Myers” is a very touchy release. Following the the impressive fourth and fifth films, it its harshly criticized. I have always been a fan of this film, especially since it also was the first in the series that I saw in the theaters. Personally though, I am a fan of the producer’s cut or “Halloween 666” as the fans know it by. Even though it is not the best release kudos to Echo Bridge for bringing the “Halloween” franchise to Blu-ray.

The best part of this film is that it brings back Donald Pleasence in what was unfortunately his last role. The film follows the terror of Michael Myers six years after he was presumed dead in a fire and he returns to kill his bloodline again.  Long-hidden secrets of the maniacal murderer are revealed and end with shocking results. The film also stars Paul Rudd. who was just coming off his role in “Clueless”.

The Blu-ray release is not the best I have ever seen but far from the worst. The high definition transfer only clocks in at 1080i and is decent but not amazing. Though I am a not a major big fan of the DTS-HD MA 2.0 track, it is decent but I would have preferred a surround track. The special features on this release are also M.I.A and comes with no extras. If you are reading this Echo Bridge, make the “Halloween” fans happy and finally release the “Producer’s Cut” of this film. I guarantee you will not regret it.