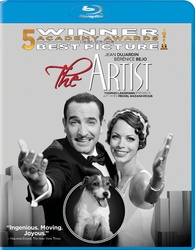 “The Artist” won Best Picture in the last year’s 84th Academy Awards. I love the film but it was not my favorite film of the year. It is unique, obviously, since it is a silent/B&W period film and don’t take me wrong it is really quite enjoyable. Berenice Bejo is so cute and completely lovable.  She has this amazing film presence. Jean Dujardin deserved his Best Actor award, since what he did in this film was extremely challenging and he gave an amazing performance. “The Artist” not only has comedy, it also has romance and plenty of drama. So if you can handle a  wordless film driven by an amazing score, then I would highly recommend this, just don’t expect to see 2011’s best film.

The film takes place in a 1927 Hollywood. Silent movie superstar, George Valentin (Jean Dujardin) is facing the biggest challenge of his career…the rise of the talkies. This rise is also leading to his fall into oblivion. Though it has a complete opposite effect for his love interest the young Peppy Miller (Berenice Bejo). She started off as an extra with George but hits stardom big with the talkies. Through these stories our two stars destinies are intertwined.

The Blu-ray comes in a really neat slipcase cause, that is definitely worth mentioning. This release also comes with a Blu-ray + UltraViolet streaming copy, which I absolutely love. The video resolution looks stunning and sharp with its B&W 1080p transfer, presented in widescreen with an aspect ratio of 1.37:1. The audio included is phenomenal with its Dolby Digital 5.1 surround track. It is funny when you comment on a silent film’s audio track as being great…but the score just sounds amazing.

The special features are decent but lacking any commentary tracks. There is a Q&A with the Filmmakers and Cast, which is fun. “The Artist: The Making Of A Hollywood Love Story” is a great behind-the-scenes look at the production. “Hollywood As A Character: The Locations of The Artist” takes a look at the filming locations showcasing them as members of the cast in a sense. Lastly there is a very funny Blooper Reel included. Overall decent but I expected a little more from the Best Picture of the Year’s Blu-ray release.