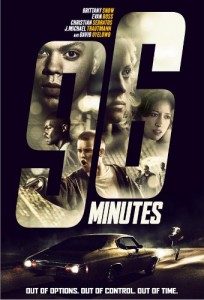 I am a big fan of films that take your on a journey though a specific event while constantly changing pace and telling the story from all different perspectives.  This film though falls flat and I found myself only losing interest as each minute progressed.  The pay-off is meant to be this thrilling climax but I found myself completely disinterested in the final outcome.

“96 Minutes” follows the intertwining story of four people that come together after a carjacking. The story flip-flops between the carjacking and the individual background of each of the young people; Carley, Dre, Lena and Kevin. Their worlds are turned upside after this one night and they will never be the same.

The film definitely really goes dark and gritty.  It also has some impressive acting, especially from Brittany Snow and Evan Ross.  The story overall though is too intertwined and has focus issues.  The special features are baron just like the film. The only extra is a commentary track from directed Aimee Lagos and actor David Oyelowo.