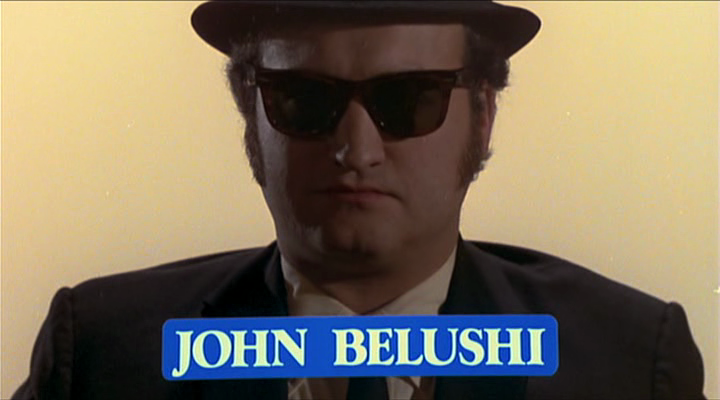 READERS: The following is an expanded version of a “Behind the Screen” I did last year on the late John Belushi. March 5, 2012 marks the 30th Anniversary of his passing. I have included my list of Belushi’s best performances as well as an excerpt from my interview with Tim Kazurinsky, who was a close friend of Belushi and his wife, Judy.

I was very fortunate to have been around when Belushi’s star began to rise and very unfortunate to hear the news when it finally burnt out. As I do every March 5 I began thinking about what might have been and I came up with the following thoughts:

1. He was truly one of a kind.
In 1978 John Belushi starred on the number one show on television (“Saturday Night Live”), had a number one movie at the box office (“National Lampoon’s Animal House”) and added an album that also went to number one (The Blues Brothers “Briefcase Full of Blues”). I can’t think of any performer, past or present, who has been able to achieve that feat. Belushi was at the very top of the entertainment world before he was 30.

2. He was growing.
After his breakout role as Bluto in “Animal House” I’m sure Belushi could
have had a full career of playing slobs. But instead he pursued other roles. A small supporting role in “Goin’ South” opposite Jack Nicholson. A hilarious cameo as “Wild” Bill Kelso in Steven Spielberg’s underrated comedy “1941.” When he and “Blues Brothers” partner Dan Aykroyd were cast in the film “Neighbors” they switched their original roles, with Aykroyd now playing the crazy neighbor who moves in next to Belushi’s suburban house owner. His final complete role was as a Chicago reporter in “Continental Divide.” It is here that Belushi gave us a look at the future. His performance was spot on and fully developed.

3. What we missed.
Belushi’s last filmed performance was planned for use during the opening of
an episode of “Police Squad.” As Belushi died before the episode ran the footage was removed and replaced. In later years, when looking for extras
to put on the series DVD, the footage was no where to be found. Aykroyd had written at least two roles for his friend, parts that would be taken by other “SNL” alum. The first role was of Emmit Fitz-hume in “Spies Like Us,” a role that later went to Chevy Chase. The second was that of Dr. Peter Venkman in “Ghostbusters,” played in the film by Bill Murray. Rumors also have him turning down the title role in “Arthur” and the part of Billy Blazejowski in “Night Shift.” Billy Blaze made Michael Keaton a star. I’m convinced that Belushi could have gone on to have a career similar to Robin Williams, who coincidentally was with Belushi the night he died. In a bit of irony, Belushi starred in a short film on “SNL” called “Don’t Look Back in Anger.” In the film he mourns the fact that he is the last living survivor of the original “Saturday Night Live” cast. Sadly, he was the first to go. Belushi was scheduled to present the Best Visual Effects Oscar with Aykroyd at the 54th Annual Academy Awards but died three weeks before the ceremony. As he stood alone at the podium, Aykroyd honored his friend by saying, “My partner would have loved to have been here tonight to present this award,
since he was a bit of a Visual Effect himself.”

Last year I had the great fortune of interviewing Mr. Tim Kazurinsky. Where I could go on and on about John Belushi the performer Mr. Kazurinsky was able to talk about Belushi the person. Here is an excerpt from the interview:

Mike Smith: Speaking of talent taken way too soon, you worked with the late John Belushi in “Neighbors” and “Continental Divide,” which were both very different roles than Belushi fans were used to? What are your memories of working with him and how do you think his career would have played out had he lived? (NOTE: A visible sadness comes over Mr. Kazurinsky’s face and
his voice lowers)
Tim Kazurinsky: One of the great tragedies of my life was losing John. John got me hired at “SNL.” I never auditioned. He just told Dick Ebersol “ you should go to Chicago and see this guy. He should be the den mother of the next troupe.” That’s what got me hired. Ebersol came…saw the show…and hired me on the spot. I wasn’t even aware I had gotten hired for the cast. I thought I was being hired as a writer. He asked me for my AFTRA card (NOTE: the American Federation of Television and Radio Artists is the union for television actors and radio broadcasters). I asked him why and he said I needed an AFTRA card to be in the cast. I said, “What do you mean be in the cast. I thought you just hired me as a writer.” He looked at me and said, “You write?” I loved John dearly. He and his wife, Judy, were so kind to me when I got to New York. They looked after me. They were my guardian angels. (Mr. Kazurinsky’s voice gets even quieter). My birthday is March 3. The three of us were going to have dinner but Judy called me up and told me we’d have to cancel dinner on my birthday because John was still in Los Angeles. I could tell she was crying and I asked her what was going on. “I think he’s in trouble out there.” John had a bodyguard named Smokey, who had been a body guard for Elvis Presley. That week it was also his daughter’s birthday so Smokey went back to Tennessee. And of course a horrible confluence of things happened. (NOTE: On March 5, 1982, John Belushi died from an accidental drug overdose. He was 33.) And now, as of March 5th next year, John will have been dead 30 years. Where did it go? 30 years? He was such a totally misunderstood artist and man. That awful book by Bob Woodward did not serve him well. (NOTE: known for helping break the story that inspired his book “All the President’s Men,” in 1984 Woodward released the book “Wired.” The book, and the film later made of it, were critically slammed. In 1991, Judith Jacklin Belushi released the book “Samurai Widow,” a book that gave John Belushi the respect and honor he certainly earned). That book was nothing but character assassination. John felt he was being “labeled” as a performer. It’s like when the Rolling Stones, influenced by the Beatles’ “Magical Mystery Tour” and “Sgt Peppers,” did “Their Satanic Majesties Request” album. It was full of psychedelic music and their fans went, “No!” John felt his fans were thinking, “you can’t do Mike Royko in “Continental Divide”…you can’t do “Neighbors”…you’re Bluto with the mashed potatoes.” But John was really smart. He was a great improviser. And he kept asking “do I have to be THAT guy for the rest of my life?” I think it really depressed him. Billy Murray was having success with “Stripes” and…I don’t really know what was going on inside John’s head but I know he wasn’t happy. He was self medicating himself and…I look at that book “Wired” and I ask “where’ is the man I know…he’s not here.”

My Top 5 John Belushi Performances:
1. “Saturday Night Live” In four short years John Belushi introduced the world to some of the most memorable characters and impersonations ever featured on “SNL.” From Jake Blues of the Blues Brothers to Samurai Mutaba to Matt Cooper in the many “Jaws” parodies, Belushi made those characters come to life. His impersonations are almost too numerous to mention, but a few of the classics include Elizabeth Taylor, Marlon Brando, Beethoven, Henry Kissinger, William Shatner and Joe Cocker. To see him on stage next to Cocker is truly a classic moment:

2. “National Lampoon’s Animal House.” As Bluto, the hard drinking leader of Delta House that would go on to become a United States Senator, Belushi gave a performance worthy of an Oscar nomination.

3. “Neighbors.” As straight-laced suburban homeowner Earl Keese, Belushi played against type with his long time partner Dan Aykroyd. Here Aykroyd was the crazy guy while Belushi played it straight. His performance here and in the same year’s “Continental Divide” was just a glimpse of the career
he could have had in front of him

4. “1941.” Steven Spielberg’s outrageous comedy has it’s detractors but there is no argument that Belushi is the funniest part of the picture. Take a look at the teaser trailer featuring Belushi as Wild Wayne Kelso (later changed to Wild Bill Kelso in the finished film):