Jaleel White known best for his role of Steve Urkel on “Family Matters” though 2012 is shaping up to be one spotlight year for him.  He is one of the contestants on season 14 of “Dancing with The Stars”, dancing with Kym Johnson. He is also the host of the upcoming SyFy’s reality show “Total Blackout”, which premieres April 25th.  Jaleel took out some time to chat with Media Mikes again about his work on “Dancing with the Stars” and to encourage his fans to vote for him at 1-800-VOTE4-12.

Mike Gencarelli: So tell us how you got involved with “Dancing with the Stars”?
Jaleel White: They never formally asked me before until this past year.  ABC’s casting department got in contact with my manager properly and asked for a meeting. [laughs] I didn’t want to take the meeting but my manager let me know it was the right thing to do. So I did the meeting and everyone was very nice. After that it was just a the process of working on me. I am not going to lie, there was tremendous trepidation since it is one thing to learn how to dance, that was daunting enough, I had to commit to practice four hours a day and put my ambitions of being a writer to the side. My mom though just keep working on me and here we are today.

MG: Any fun behind the scenes stories so far?
JW: Oh yeah! I got a good one with Tony (Dovolani), one of the pro-dancers, who is dancing with Martina (Navratilova) this season. The couples got gathered together with the producers and they told us the rules and things they expect on show night. Tony raises his hand and said “I got one thing I want to share with all of you, ok?!, no matter how you dance is going you don’t leave your pro out there on the stage. You don’t 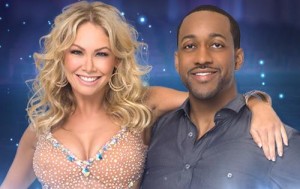 walk off on them. If you get lost in your dance, you look into your dancers eyes and we will guide you through it.” I love Tony, he is a great guy. I guess he had some problems in the past with people freezing up on him. I thought that was particular funny. I come from a performers background and I know you never run off the stage.

MG: First week of the show you tie for the top spot, does that create and pressure going forward?
JW: Actually I really don’t. I tell everybody, I still see life in five day sitcom blocks. So if you give me five days to learn something, I should be proficient enough to shoot it. That is just the way I see preparation in general. The first episode for me was just such a validating experience. You put in the work and you can deliver the performance based on your work. Kym and I ran that dance into to the ground, as we must have done it at least 523 times. We weren’t just in there chit-chatting. We worked until we had to change our shirts and take two showers.

MG: You seemed to really feel natural on the dance floor, Any prior dance experience?
JW: I have zero dancing experience. Other than dancing as a kid during parties, school dances, church and camp. I just listed all my dance experiences there.

MG: What do you like or fear most about being out on the dance floor?
JW: At this point, my fears are slowly starting to go away. My biggest fear though is injury. I want to keep my body in good shape. I can feel certain areas getting tighter and I can feel my body adjusting. Every dance has it own personality and hopefully you can gel with that personality of the dance. Some people try to fight against that but I just go with it. Luckily for me, when I 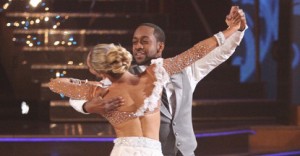 dance I smile naturally. Some people just have this perpetual panic on their face while they are dancing. I am exactly the opposite. As soon as I start moving I am smiling away [laughs]. The more I get into the dance the more I start enjoying it and that’s when the rehearsal process kicks in.

MG: How does it feel to be compared to a young Gregory Hines by one of the judges?
JW: I mean that is huge man, really. It is a long stretch from being compared to Steve Urkel [laughs]. It is nice to be able to show people that I can do different things. Growing up I never understood the importance of being different. I thought I would just excel at whatever job I was given. I didn’t know at the time that if people only thought of you in one way they will only give you one job. Everything about this experience with “Dancing with the Stars” has been so positive for me, so far.

MG: Do you and Kym Johnson have any special dances planned for the show?
JW: I definitely have a dance that means a lot to me. I obviously need to survive the eliminations to get to it. I told you though I obey the dance, I do not force anything. As much as I love music, you have to understand that not every song works for the dance. I think though the dance I have in mind could make some real noise…if I can nail it. But you have to vote for me though if you want to see the dance. It’s 1-800-VOTE4-12. We are team #12.

MG: Besides “Dancing with the Stars”, you are also hosting “Total Blackout” on Syfy this April, what can you tell us about that experience?
JW: It was a great experience. They are actually still tinkering with the show right now. I have been going in and doing some last minute tweaks and changes. The SyFy people have been over the moon about me participating with “Dancing with the 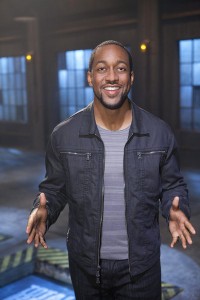 Stars” also. People are really going to love this show. I am calling it ‘guinea pig TV’, it is that thing that you are flipping through and you find yourself watching two episodes back to back without even realizing it. I also think it would be a really fun show to do on the road.

MG: What do did you enjoy most about hosting a show?
JW: The best thing I like about hosting is that this stuff is not happening to me in the dark [laughs]. I am serious. I have test contestants in foam rubber suits, I give my instructions and then go back to my dressing room, watch the live feed and eat some Doritos [laughs]. They can have the tarantulas crawling up their hands. I am all set.

MG: Just recently you also appeared on “Psych” again, is Tony going to be seen again soon?
JW: Who knows man. I always have such a blast with the “Psych” boys.  It is one of my favorite shows that I have ever guested on. James (Roday) and Dulé (Hillare) are excellent actors and we get in some good trouble. I have been on two episodes…so hey, why not make it three.

MG: So after you win “Dancing with the Stars”, what you got planned next?
JW: Right now, I need some votes for team #12 on Dancing with the Stars, it’s 1-800-VOTE4-12. Supposedly you can’t text votes in unless you have AT&T, so a lot of people don’t know that. There is also the option to vote online at http://vote.abc.go.com/shows/dancing-with-the-stars/vote.  This is going to be a fantastic season for sure.