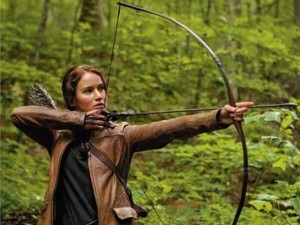 It happens every year. Called “The Reaping,” it consists of children being randomly selected to fight to the death in what has been known as, for the past 73 years, The Hunger Games. The winner is treated to a life of luxury. The losers…you know.

In District 12, 16 year old Katniss Everdeen (Lawrence) is hunting for food. No, really. Bow and arrow in hand she scopes out a deer. But the deer is startled by the sudden appearance of Gale Hawthorne (Liam Hemsworth). It’s obvious the two are sweet on each other but there are more serious things afoot. Like the upcoming “Reaping.” To be eligible, a child must be between the ages of 12 and 18. Katniss’ sister Prim just turned 12 this year and is nervous that she will be picked. With only one entry in the drawing her chances seem slim. But when the time comes it is Prim who is called. To save her sister Katniss offers herself up as tribute. Together with Peeta Mellark (Hutcherson), Katniss is sent to the Capitol to prepare herself for, literally, the battle of her life.

Based on the first of a series of popular novels by Suzanne Collins, “The Hunger Games” is a smart cross between “The Running Man” and “The Truman Show,” with a little “Romeo and Juliet” thrown in for good measure. In a brief intro we are informed that, many years ago, 13 districts tried to overthrow the government. When the rebellion was quashed, those in charge declared that, because of their actions, each year two children (a boy and a girl) would be “chosen” to fight to the death on live television. That’s right. “The Hunger Games” is a national phenomena….the Super Bowl of Carnage. “May the Odds be forever in your favor” is the often repeated phrase that the participants hear. But when there can only be one winner, the odds are pretty much stacked.

I haven’t read the books but I do know of the outcry fans of the novels had when Lawrence was cast. I liken it to the screams that came from Anne Rice fans when Tom Cruise was picked to play Lestat in “Interview With a Vampire.” The fans I talked to after the “HG” screening seemed pretty pleased with Lawrence and with good reason. Coming off an Oscar-nominated breakout performance in “Winter’s Bone,” Lawrence is continuing to prove herself as one of the best new talents working today. Cute as a button, Lawrence also manages to project the quiet strength needed to make Katniss believable. As Peeta, Hutcherson comes off a little whiny. If I had to bet on the outcome of the games I think I’d take the little 12 year old girl over Peeta. The supporting cast shines, even if they do so in hairdos that look like they were left over from a Tim Burton film. As the games master of ceremonies, Tucci chews the scenery in huge teeth and what appears to be a chonmage (the official name of the hairstyle you’d find on a Sumo wrestler) on his head. As Haymitch, the “mentor” for the team from District 12, Woody Harrelson hits all the right notes. As a past “winner,” he can’t help but be cynical about his charges chances. And a true tip of the hat to musician Lenny Kravitz for a strong performance as Cinna, the District 12 style guru. Coupled with fine work in “Precious” a couple of years ago, Kravitz could easily build a fine career in films.

As he has in previous films like “Pleasantville” and “Seabiscuit,” director Ross manages to get inside the characters he’s filming, allowing them to not be overshadowed by the action on screen. And speaking of the action, the film carries a rating of PG 13 largely because of the subject matter. There is some violence on screen but I don’t think it’s anything too rough for the book’s tween-age readers.

One thing I caught that might confuse those who haven’t read the books (and this is not a spoiler). During the opening “video” it is announced that 13 Districts revolted yet in the film only 12 are represented. I asked someone who read the books and was informed that the 13th District was destroyed…something that is made more of in the later books. Thought I’d share this so, like me, you’re not sitting in the theatre trying to figure out how two times thirteen equaled twenty four!