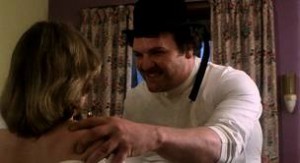 This film reminds me of a poor combination of “A Clockwork Orange” and “I Spit On Your Grave”. They film was banned in the UK with a X-rating back in the day due to its rape and gore scenes but in comparison to today’s films they are tame. The story is also tame and has no direction causing the film to drag on for its short 90 minutes. It doesn’t really get a chance to take off and therefore falls flat quickly.

The film follows a group of school girls that become stranded in the woods and looking for a place to spend the night, they are unaware that they are actually in a lot of danger. There are being stalked by four mental patients, who escaped from their clinic and to make it worse are also being used as medical experiments. They are stuck in a dream-like state and believe that there is no consequence to their actions. 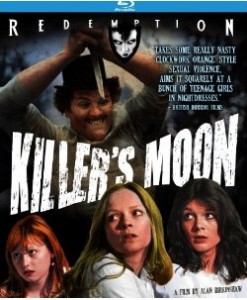 The remaster is from the original 35mm negatives. It looks good with its high def upgrade but not overall impressive. The audio is like the video nothing really impressive boasting an uncompressed LPCM 2.0 track. Redemption is usually know for their impressive remastered editions but this one really doesn’t cry out amazing.

The special features are not really great either besides the audio commentary track. It features James Blackford from Redemption chatting with director Alan Birkinshaw and actress Joanna Good about the film and their recollections. Besides that there are two trailers that are in HD and photo gallery also in HD. Then there is two separate interviews with the director Alan Birkinshaw and actress Joanna Good. They are only in standard definition and run about 12-15 minutes each. Even those the features aren’t packed it is much better than the last few releases from Redemption like “Virgin Witch” and “Hills Have Eyes: Part 2”, which had none.