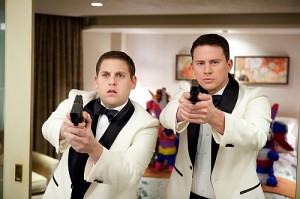 2005. High school seniors Schmidt (Hill) and Janko (Tatum) are on opposite ends of the popularity meter. Schmidt is quiet and smart and has a horrible time talking to girls. Janko is the classic big man on campus. For very different reasons, neither attends their senior prom.

2012. Reunited at the police academy, the two develop a friendship. But their first crack at big time crooks will have to wait. They’re on bicycle duty. But when an “old and recycled” program is reinstated they find themselves assigned under cover as high school students hoping to uncover a new drug and its manufacturer. And the fun begins!

Hilarious from beginning to end, and featuring a surprisingly funny performance by Channing Tatum (who knew this guy could be funny…he’s always brooding every time I see him), “21 Jump Street” is the funniest film of the year so far. Both cops find out that high school isn’t the same the second time around. While Janko was the epitome of cool in 2005, he finds that the shift of power now favors the more studious kids. Which works out fine for Schmidt, whose high school highlight was forming the Juggling Society (one man, three balls). It’s kind of like “The Breakfast Club” only now Anthony Michael Hall is cooler then Judd Nelson.

Both leads do a great job conveying they’re new stations in life. Ice Cube is the, in his words, stereotypical angry black police captain, and he has fun with the role. Supporting characters, including Chris Parnell, Rob Riggle and Dave Franco (James’ little brother and an upcoming talent to watch) keep the film moving along briskly.