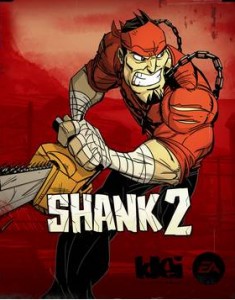 If Rambo, every Jason Statham character created, Dutch from Predator and the characters from Contra, Double Dragon and those forgettable guys from the Final Fight series, had a baby, that baby wouldn’t be half as badass as SHANK. This side scrolling mass of testosterone, steroids and good old fashioned guts has gotten my palms sweaty, my neck muscles close to tearing and my need for carnage fulfilled.

I didn’t play Shank 1 prior to this review but you can be damned sure I will after. The storyline is simple: Bad Guys have kidnapped someone close to you and placed even more bad guys in between you and them. Your job? Slice, shoot, maim, stab and kill said bad guys, with an arsenal of weapons ranging from knives and guns to chainsaws and fish?? Yep. I pummeled a random dock working henchman with a large sea bass. And you know what? I felt good about it. I worked my way through these sloshy, blood-soaked levels in ways that Stallone & Schwarzenegger would stand slack jawed and peeing.

The games mechanics are typical of a side scrolling adventure, with each level ending in some sort of boss like encounter. Each level upped the ante a bit as I progressed through and ended in Adult Swim style, cut scenes that offset the carnage with some gory humor. At one point Shank kills a Great White Shark by breaking its neck and pulling out its jaws with his bare hands, causing the The “Jaws” and Fulci fan inside me to exclaim a joyful, “That-a-boy!” The controls are fairly smooth. No ground breaking changes there. Play time for the game is also typical for this genre, fairly quick.

The game features costume and weapons upgrades and 2 player co-op is heavily featured in the Survival mode. You and that special someone in your life can rack up the bodies together in a single screen mission where you are tasked with protecting supplies from crazy bombing henchmen. With a full arsenal of traps and weapons at your disposal, you divide your time between killing baddies and taking hefty swigs of tequila. You guessed right…that wonderful Mexican elixir has a new use in your life. Its health restoring properties in-game make me wish it were real out of game. I would drink myself into becoming the next Charles Atlas!! 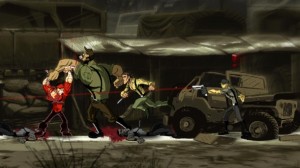 One quick mention here for the music!! Fantastic!! Mixture of Top Gun-like phrasings, with a little every Delta Force score ever produced.

If your a fan of these types of games, consider yourself a fan of this one. However, if you find these button mashing fighting games a bit repetitive, this particular one won’t change your mind.

Shank 2 is available for download on all the good systems… 🙂 Sorry Wii…. 🙁