JOHNNY CASH’S 80TH BIRTHDAY CELEBRATION SET TO KICK OFF FEBRUARY 26 WITH GROUND-BREAKING ON THE RESTORATION OF HIS DYESS, ARKANSAS BOYHOOD HOME

Archive Recordings from Sun and Columbia Years, Johnny Cash Museum and Much More Planned for 2012 to Pay Tribute to The Man in Black

LOS ANGELES, CA – (Tuesday, February 7, 2012) — America’s much-treasured icon Johnny Cash, who would have turned 80 years old on February 26, will be the focus of a series of tributes and celebrations in 2012, starting with the official ground-breaking of the Johnny Cash Boyhood Home Project in Dyess, AR. ‘A number of family members including Cash’s children Rosanne, John Carter, Cindy and Kathy Cash Tittle, plus at least seven of his grandchildren, will be on hand for the launch event scheduled to take place February 26, 2:00PM at the Dyess Community Center, followed by a birthday tribute. 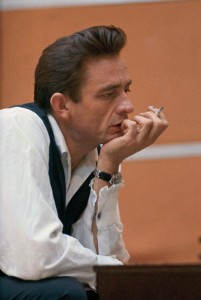 Said Rosanne Cash, “February 26th, 2012 marks the 80th anniversary of my father’s birth. On that day, the extended Cash family will gather at his boyhood home in Dyess, Arkansas, to celebrate the groundbreaking of the Johnny Cash Boyhood Home project: an undertaking long in the planning, and a great honor and thrill for our family. This entire year we celebrate not just his roots and history, but the breadth and depth of his artistic legacy, his spirit and authenticity, and the love and rhythm he brought to all our lives which continues to inspire millions of people around the globe.”

The Johnny Cash Boyhood Home Project will be a permanent tribute to Cash’s early life and that of his family’s, as well as reflect an historical slice of American life during the 1930’s Great Depression. Arkansas State University is spearheading the restoration of not only the house that Cash grew up in and its various outbuildings, but has taken under its wing several other Dyess historic buildings in an effort to preserve the town’s rich heritage. ASU’s end-goals include the establishment of a Johnny Cash museum, a space for educational workshops, classes, and demonstrations, the creation of tourism-related jobs in the town, and providing scholarships to ASU for deserving students from the Dyess area.

ASU’s Dr. Ruth Hawkins, who initiated Arkansas’s Hemingway-Pfeiffer Museum and other Arkansas heritage sites, is overseeing the Johnny Cash Boyhood Home Project. “We are working very hard to achieve authenticity in this restoration,” said Dr. Hawkins. “Based on photos and the recollections of family members, the house will be furnished as it was during the 1930s and 1940s when the Cash family lived there. We’ve gone so far as to take core paint samples from the house and send them for lab analysis to ensure that we have the correct colors.

Fundraising for the project began last August with the first annual Johnny Cash Music Festival held on the ASU Jonesboro campus. The concert featured performances by John Carter Cash, Rosanne Cash, George Jones, Kris Kristofferson, and many others, all of whom donated their time. The Cash family is committed to hosting the Festival yearly, and has earmarked all proceeds for the Dyess restoration project.

Johnny Cash, known as “J.R.,” grew up in Dyess Colony, an agricultural resettlement community in Arkansas that was part of the “New Deal,” the government’s economic program that provided relief to desperately poor families. In 1935, the Cash’s were one of 500 original families who received a brand new Colony house, 20 to 40 acres of land, a mule and seed for farming (less than 40 houses remain). Life in the Dyess Colony served as a tremendous influence on the young J.R., with the back-breaking work he did in the cotton fields, and the music he sang in church and heard on the radio providing the inspiration for many of the songs he would later write, such as “Five Feet High and Rising” and “Pickin’ Time.”

Also set for this year-long birthday celebration is the opening of the new Johnny Cash Museum in downtown Nashville. On display will be many items from the legendary House of Cash that closed in 1999, as well as additional memorabilia endowed by the Cash family. Details will be announced shortly. Also in celebration of Cash’s 80th birthday, Columbia/Legacy will release a series of archive titles beginning with Bootleg IV: The Soul of Truth slated for April 3. More information will be announced shortly. In addition, three documentaries on Johnny Cash’s life are in various stages of development.

Separate from spearheading their father’s 80th birthday celebrations, John Carter and Rosanne Cash are each busy with their own projects. Rosanne, whose book “Composed: A Memoir,” was released in hardcove.