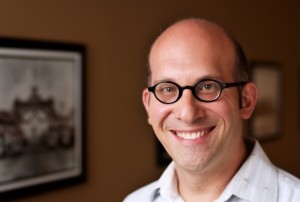 Mike Gencarelli: How did you come up with the idea for a live-action graphic novel production tour, called “The Intergalactic Nemesis”?
Jason Neulander: The project started as a radio play back in the ’90s when a few friends and I decided to try our hands at a no-budget tribute to Star Wars and Raiders. 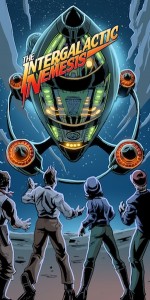 Over the years, the project developed a big local following (and we did our share of revisions and rewrites) until I was invited to bring it to the 2,400-seat Dell Hall in Austin, where we’re from. I felt that venue was too big for the intimate experience of a radio play and in a flash had a vision of comic-book artwork projected on a huge screen to create a visual spectacle. It took about 15 months for Tim Doyle to create that artwork and then we premiered the show to 2,100 people. Ten days later, we started booking tour dates and, well, here we are!

MG: The Intergalactic Nemesis will be performing on live on “Conan”, how did this come about?
JN: I landed us a story on NPR’s All Things Considered. Meantime, my agent had been working on the Conan thing. When the NPR story aired, that was the catalyst for the Conan folks to give the green light.

MG: Are you nervous performing with Conan O’Brien and Andy Ritcher?
JN: A little, but mainly really excited.

MG: Tell us about the character you play “Mysterion the Magnificent”?
JN: The story of “The Intergalactic Nemesis” takes place in the 1930s. Mysterion is a world famous magician and stage performer who has secret plans to take over the

world (with the help of an invading force of sludge monsters from the planet Zygon).

MG: What is the biggest challenge in performing this live?
JN: Remembering the lines!

MG: What can expect from the sequel entitled “Book Two: Robot Planet Rising”?
JN: Lots and lots of robots. Adventure. Danger. Excitement. Book Two is actually the second of three, so, like any good part 2, it’s a little darker, a little more complex, and we get to meet a bunch of really awesome new characters.

MG: Where can people find out about this tour and your upcoming dates?
JN: http://www.theintergalacticnemesis.com/tour