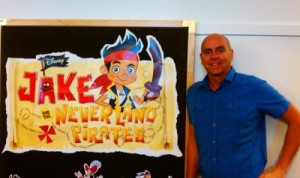 Howy Parkins is the supervising director for Disney Junior’s “Jake and the Never Land Pirates”.  He has his hands in pretty much every aspect of the show, which recently just began it second season.  Howy has been working with Disney for around 15 years and also recently worked on its series “Mickey Mouse Clubhouse”.  Media Mikes had a chance to chat with Howy about this wonderful show and what we can expect this season and going forward.

Mike Gencarelli: “Jake and Never Land Pirates” returns for Season 2 on Monday, February 20, tell us about that season?
Howy Parkins: For the second season, we really branched out. That is the beauty of Never Land and the Never Sea, it is just so vast. We will take the kids to some very wonderful and magical places. You look at the island and ask “Where can you have a mountain range…or a desert?”, but that is the beauty of the show being able to explore and go on adventures.

MG: Tell us about Peter Pan returning to Never Land?
HP: We were thrilled when we got the green light to bring Peter Pan physically into the show. With Never Land, we had Captain Hook and Mr. Smee already, which just made for the perfect circle. I think we mentioned him a few times in the first season. So when we found out we were actually able to bring him into the show, we got busy right away. Again, it is a Disney classic character, so we were respectful but also very honored that we were able to bring that character into the show with such fan following of so many generations.

MG: Tell us about your general role on the show?
HP: I am the supervising director. I came out of animation school many years ago. I’ve story boarded and been around designer. I have directed at Disney 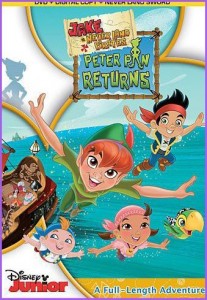 for around 15 years. With this show, I am just thrilled to be a part of and I enjoy coming to work every day. I work with a great team of designers on this show. We really tapped into our knowledge of Disney and wanted it to look like a really rich Disney-esque show. I feel we really captured that.

MG: Take us through the production process for one episode of “Jake and Never Land Pirates”?
HP: When we get final script, we go into our preliminary design meetings. In the second season, we do go to some new places, like we have an underwater episode. We have new characters coming up. So with those situations, I would sit with my crew and sketch out ideas and refine them. The voice talents come in next and then we move to storyboard, which takes about five weeks. We scan the boards into our editing bay and with the adding of voice recording we have what we call a “like reel”. It is essentially the show, but in its bare-bones form of black and white line drawings. From that I can work on the timing, staging and cinematics aspects of the show. Once we lock that show and we send it to an animation studio in Canada and I believe they get twelve weeks to do full animation. By the time it gets back, we have about six to eight weeks to finish up. Then we give our musicians a few weeks to score the episode and then we move to sound effects, which I also sit in on. Then we polish it up and make it nice and shinny and off it goes. I would probably about three or four months per episode. We stagger them, obviously, so we have many going on at the same time.

MG: Why do you think a show like “Jake and Never Land Pirates” has been so successful?
HP: When we started talking about doing the pilot, there is just something about pirates for boys or even girls ages 3-7 years old . Also coming on the heals of “Pirates of the Caribbean” series, it is such a fresh subject matter. I think because the three kids on the show are so adorable, so much character and so fun, who wouldn’t want them to hang out with. They are a nice allure for the kids at home. Also for the parents, we try to put positive messages into each episode. Their mannerisms and attitudes are just so enjoyable. There are just so many assets that come together as a package.

MG: The show was just green lit for a third season already, can you reflect on that news?
HP: It is very early and we are not used to that kind of thing. We are still in the midst of the 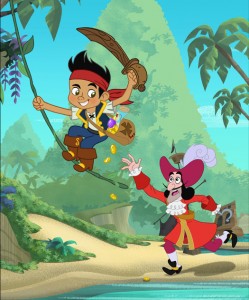 second season. We are excited because now we get to plan in advance and discuss where we want the show to go now and who do we want for reoccurring characters etc. We are just rolling with it and I think we can definitely keep this exciting for at least another 37 episodes. In Never Land, there are many places we can still discover. It is definitely a challenge but we are all up for it.

MG: You’ve worked on shows like “The Simpsons”, “Recess” and “Mickey Mouse Clubhouse”; how does this show compare?
HP: I think when my son came along, who is now almost 11 years old, I got vested in the subject matter of what I work on now. Back in the day, working on “The Simpsons” was a great experience. I also worked on same Nickelodeon shows, it was fun but it was an older audience. With this show I am happy because we hook in the kids, but also the older brother/sister and even parents can watch as well and get just as much out of it. I think we discovered this formula where the entire family can watch, which is a really hard this to do. As much as I enjoyed the others, this one is really special.

MG: Besides just the television show, what else can expect from “Jake and Never Land Pirates”?
HP: Definitely there is some great merchandising being launched. It really brings the show into people’s home and they are able to buy toys and play with them while watching the show. When we are sitting in the design meetings, we think about “can this make a good toy?”, so we try and plan ahead. I know there is also a lot of on online stuff right now for the show as well. We were even reading tweets about our show, which has never happened before. That was really exciting. So there is just a lot to look forward to and I am really happy to be a part of it.